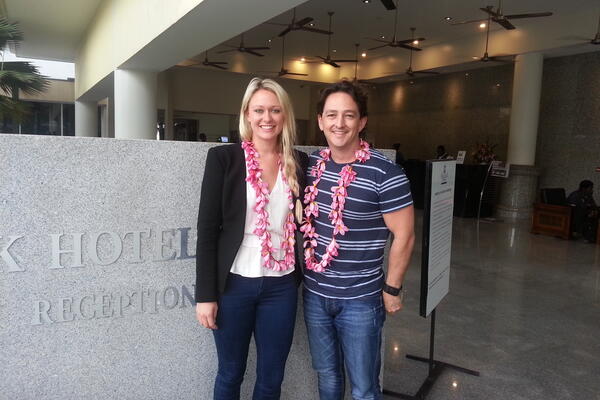 A three-man crew is scheduled to arrive in Honiara late this month when it will begin filming in and around Honiara, Gizo, Munda, Tetepare Conservation Island and Ugele Village on Rendova Island.

The crew’s focus will be on the country’s unique culture, WWII history, natural environment, diving, flora and fauna.

Planning for this key visit is well under way with a two-man reconnaissance team already in Honiara mapping the way for the film crew which arrives on 22 November.

The reconnaissance team hit the ground running on arrival, meeting with SIVB CEO, Josefa ‘Jo’ Tuamoto and his team and Solomon Airlines’ senior management within minutes of landing at Honiara International Airport.

Describing the event as a “beyond major” opportunity for the country’s tourism industry, Mr Tuamoto said the end result was intended to firmly propel the Solomon Islands into the full glare of the world tourism spotlight.

“National Geographic’s reach is incredible,” Mr Tuamoto said.
“We know the Solomon Islands program will be broadcast to more than 40 countries around the world and across several regions.
These, he said, include the Middle East, Latin America, Russia and the Commonwealth of Independent States which includes 10 fast economically emerging former Soviet Republics.
“In the USA alone the National Geographic Channel is available to more than 86 million television households so the potential to showcase our tourism potential is enormous,” he said.
Focusing primarily on geography, history and world culture, National Geographic Channel is the TV and online version of National Geographic Magazine which has been published continuously since its first issue in 1888.