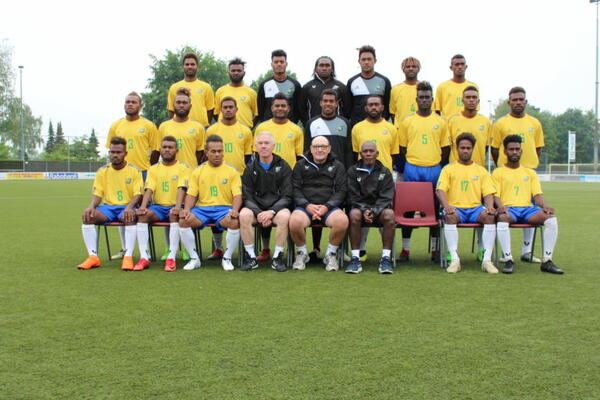 The side lined up for their first ever game on European soil.
Source: nosfoundation.com
Share
Friday, 24 May 2019 09:05 AM

Solomon Islands slip to a narrow defeat in opening game of their Netherlands tour.

The Solomon Islands national team started their run of seven games in ten days with a narrow 1-0 defeat to Dutch Derde Divisie side ADO ‘20 thanks to a goal from Rick Neele after seven minutes.

It was a good test for the national team, who have been training in The Netherlands for the past week leading up to the game. The squad will be tested with more games this week when they face VOAB on Friday evening before heading to Roosendaal on Saturday to play RKSV BSC.

Under the stewardship of former Netherlands defender Wim Rijsbergen, the side lined up for their first ever game on European soil with an experienced side, including captain and current leading goal scorer Benjamin Totori. The coach made three substitutions at half time and a further three changes with 20 minutes to go as he rotated his squad.

Totori had an early shot blocked for the Solomon Islands, but they were soon a goal down when Neele was able to work a bit of space inside the area and poke the ball into the corner past Philip Mango. In the build up, a throw in managed to hit two Solomon defenders before Sead Mazreku flicked the ball in to Neele to score.

With the visitors settling into their stride, they nearly pulled the score level with Joses Nawo chased down the goalkeeper and managed to block his clearance and the ball spun agonisingly wide of the post.

A minute later, Totori broke free and showed a fierce turn of pace to get past the defender before squaring the ball into the box, but the ADO defence were able to clear the danger.

ADO’s Luc Schuffelen was shown a yellow card for a foul on Alwin Hou on the edge of the area and Totori couldn’t quite curl the free kick on target.

Mazreku had a chance for the hosts on 35 minutes when his low drive was well saved by Mango and the goalkeeper was able to react to pounce on the loose ball.

On the stroke of halftime, Solomon Islands were displaying some neat passes around the ADO penalty area and the ball was worked to central defender Allen Peter who hit a ferocious low shot just wide of Mats van der Wijst’s goal.

Rijsbergen made a triple substitution for the start of the second half when striker Andrew Abba, midfielder Dennis Ifunaoa and defender Andrew Rarangia replaced Nawo, Gagame Feni and Peter respectively.