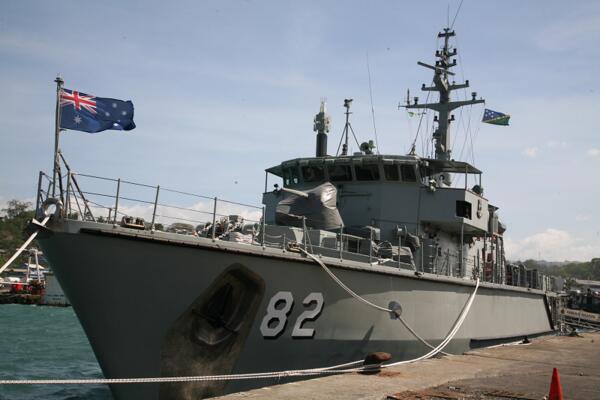 The Joint Task Force is in the Solomon Islands for Operation Render Safe 2016, part of the enduring Australian-led mission to help rid the South West Pacific from the dangers of explosive remnants of war.
Source: Photo supplied
Share
Friday, 16 September 2016 09:04 AM

A concentrated effort to dispose of unexploded bombs and munitions has now commenced in Central Province thanks to a multinational military team that is working with the Royal Solomon Islands Police Force over the next three weeks.

Bomb disposal experts from the Defence Forces of Australia, Canada, Britain and New Zealand will work with Solomon Islands’ police experts to destroy as much World War 2 explosive ordnance as possible around Honiara, Tulaghi and Yandina.

Royal Australian Navy officer Commander Etienne Mulder, commander of the Joint Task Force, said the key to the success of the mission will be the assistance of the citizens of the region.

"Without doubt the local people’s knowledge will be crucial in providing us with the locations of the bomb and munitions," he said.

"With the help of the people we can assist in the disposal of the munitions to help reduce the threat of this dangerous menace.

"The tragic consequences of one of these bombs exploding accidentally go beyond the people present when it occurs.

"It affects the whole community - parents, brothers, sisters and children are all devastated by the injuries and deaths that occur.

"We want to help as much as we can, and with the people’s cooperation we hope to make a big difference to the safety of their communities."

The Joint Task Force is in the Solomon Islands for Operation Render Safe 2016, part of the enduring Australian-led mission to help rid the South West Pacific from the dangers of explosive remnants of war.

Mine Warfare ships from the Royal Australian Navy and Royal New Zealand Navy will operate near Tulaghi and Yandina to remove explosives in the sea, helping to make the waters safer for fishing and tourism.