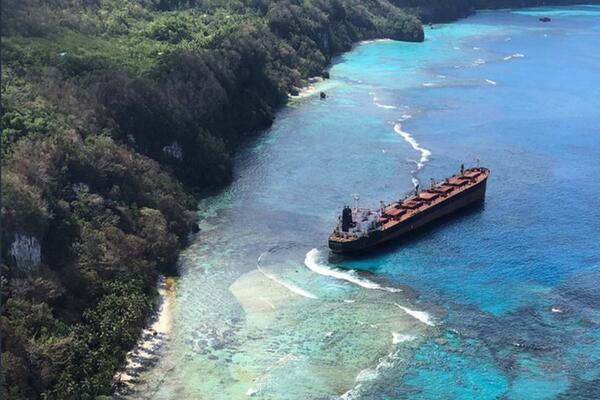 An operation is underway in the Solomon Islands to re-float a ship that ran aground three months ago, causing an environmental disaster.

An operation is underway in the Solomon Islands to re-float a ship that ran aground three months ago, causing an environmental disaster.

The MV Solomon Trader was carrying 700 tonnes of oil. It hit a reef at Rennell Island, near a protected marine area, on February 5. Part of its cargo has leaked into the sea, poisoning fishing grounds.

"They have been trying to refloat the vessel since Thursday but because of low tide they have not been able to, until today," said Melchior Mataki, chair of the Solomons National Disaster Council.

Rennell Island is one of the largest raised coral attolls in the world. But authorities are sure it hasn't been damaged by the 6km-long oil spill.

"There is a preliminary report but the full report will be made known once assessments and investigation findings are compiled properly," said Mataki.

The Solomons government is likely to seek financial compensation from the boat's charter, Indonesian-based Bintan Mining.

Since early February, bulk carrier, Solomon Trader, has been wedged on a reef off Rennell Island, where it has spilled an estimated 100 tonnes of oil.

The spill happened near a protected marine area and poisoned local water supplies and fishing grounds, sparking an international outcry.

Director of the Solomon Islands Disaster Management Office confirmed that work is underway to refloat the vessel and towed from the reef.

Its director, Loti Yates, said the process, which is being led by a salvager contracted by the shipowner's insurer, will take around three days.

"It is a huge and very, very difficult operation," he said.

Mr Yates added that cleanup efforts which began in March are ongoing, with oil still coating the shoreline of the nearby and once pristine Kangava Bay.

He said requests for the data - which is too big to transfer online - to be sent physically had gone unanswered for the past three weeks.

"We are sort of frustrated but we are still hoping that it will arrive."