MoU to Set Up Canadian Education in Solomons 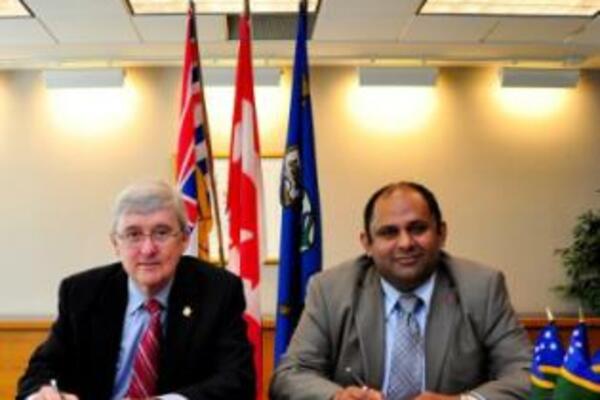 Canada's Kwantlen Polytechnic University and the Canadian International Training & Education Corp (CITREC). have signed a Memorandum of Understanding that opens doors for introduction of Canadian Education in the Solomon Islands.

Kwantlen Chancellor Arvinder Bubber witnessed the historic ceremony. "This is the first partnership between Kwantlen and CITREC, and we are excited about the opportunities it will provide to students of the Solomon Islands," said Kwantlen President John McKendry.

CITREC CEO Mr. Dwivedi welcomed the partnership saying Kwantlen's presence in the Solomon Islands will help build educational bi-lateral relations between both Canada and the Solomon Islands. "When you take a Country's education to another Country, it is not only the curriculum that is imparted but also values, tradition and opportunities to those citizens of that country," Mr. Dwivedi said.

Mr. Dwivedi said that through the establishment of a Canadian program students are presented with the opportunity to study in their home country and obtain Canadian credentials. The Government of the Solomon Islands and the Canadian International Training & Education Corp. (CITREC) have an agreement that will see Canadian certificate, diploma and degree programs being offered in the Solomon Islands.

Prime Minister Philip further added that with the Canadian qualifications Solomon Islanders have improved chances to compete in overseas job markets especially in Canada where such opportunities are known to exist.

Early this year, a senior ministerial delegation visited Canada in order to strengthen ties between the two countries. The delegation included Solomon Islands Foreign Affairs Minister Hon. Peter Shanel Agovaka, Minister Ha'amori, as well as Solomon Islands High Commissioner to Canada, Collin Beck. Kwantlen Polytechnic University was among one of the Universities that was visited by the Ministerial delegation. The visit was facilitated by CITREC.