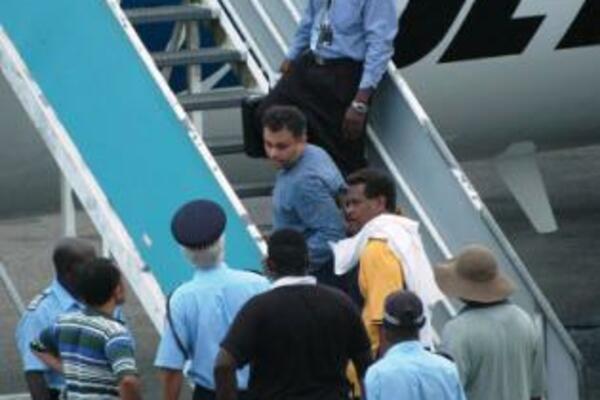 Moti was arrested in December 2007 at Brisbane International Airport after being deported from Honiara following his sacking as attorney-general of the Solomon Islands.
Source: STO Archives
Share
Friday, 05 June 2009 09:01 AM

Media reports from Australia say that the legal team for the former Solomon Islands Attorney General, Julian Moti, have issued subpoenas to several agencies, asking that they reveal documents relating to his prosecution and alleged conspiracy.

Channel Nine reports that the Supreme Court in Brisbane was told on Thursday that Moti will try to have seven child sex allegations thrown out by claiming eight Australian agencies were motivated by politics when they pursued his prosecution.

The agencies include the Department of Foreign Affairs and Trade, the Australian Federal Police, the Australian Secret Intelligence Service and AusAID. Moti's lawyers have issued subpoenas to the agencies, asking that they reveal documents relating to his prosecution and the alleged conspiracy.

Moti, a Fiji-born Australian citizen, was arrested in December 2007 at Brisbane International Airport after being deported from Honiara following his sacking as attorney-general of the Solomon Islands.

He has been charged under commonwealth law with seven counts of engaging in sexual intercourse with a person under 16. The charges relate to the alleged rape of a 13-year-old girl in Noumea and Vanuatu in 1997.

Details of his stay application, which will be heard next month, were revealed in court on Thursday as the government agencies fought to have the subpoenas struck out.
Barrister for the government agencies, Douglas Campbell, SC, told the court Moti would argue that the Australian government pursued his prosecution over concerns "he was an impediment to any political interests it wanted to pursue in the Solomon Islands".

"(His argument concerns a) conspiracy that a number of Australian departments and agencies joined together to prosecute in order to influence or affect (foreign) affairs," Mr Campbell said.

The court was told Moti would argue he was unlawfully deported, and that any trial would be unfair due to the delay in bringing the charges and public prejudice.
Mr Campbell argued Moti's legal team had used a "scattergun approach" when ordering wide-range disclosure from the eight agencies.

He told the court the defence team's refusal to narrow their scope was an attempt to "trawl" for any evidence that might help Moti in his stay application.

Moti's barrister Ken Averre said the request was within the bounds of the law, and that there was a legitimate forensic purpose for seeking the material.

Both parties will provide further written submissions, with Justice Martin Daubney indicating he would rule on the subpoenas issue next week.