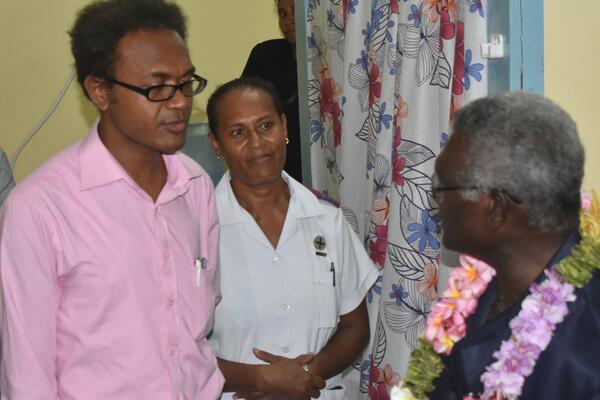 “Currently we have two or three babies and mothers on one bed. The wards here are very crowded and there is no space”, Dr. Jack Siwainao, Consultant in charge of Labor ward told Prime Minister Manasseh Sogavare.

This morning (Monday 20th April) the Prime Minister and his delegation made a visit to the National Referral Hospital.

Their visit was purposely to open the isolation unit as well as visit facilities at the National Referral Hospital established to assist Ministry of Health and Medical Services against COVID-19.

But the Prime Minister was also made to visit the labor ward where he saw first- hand the dire situation of mothers and babies in the wards.

“Only 10 recovery beds in the labor ward. So we have about 15 deliveries per day on average, on heavy days we would go up to 30 births per day”, Dr. Siwainao an obstetrician and gynecologist said.

He said most times, mothers would share beds which is not good.

Siwainao said ideally, mothers should stay at least 24 hours at the hospital. But he said with the lack of space, mothers are discharged four hours after giving birth.

“This is very risky for both mothers and babies. Sometimes either mothers or babies will develop other illnesses while at home”, Siwainao said.

He said in terms of infection control when it comes to COVID-19, his ward does not have the capacity to control the illness if there should be a break out.

“COVID-19 is a disaster. But we are already in a disastrous state too”, Dr. Siwainao said.

Lack of space and over-crowding is an issue they are faced with. He said unlike any other illness, giving birth is not something which a person can postpone.

“It is a natural process, it only stops when the baby comes out and the placenta is removed”, Siwaino said.

He said currently there are no gynecology wards for women and girls and postnatal wards for babies.

“I think the women of this country deserve better service. The only way under the sun which human beings come into this world is through the womb of a mum”, Siwainao said.

He said the labor department at the NRH is asking for a bigger ward to accommodate the mothers and babies.

He said they hope after the Prime Minister’s visit, government will prioritize the needs of the mothers, babies and workers at the labor and gynecology ward.