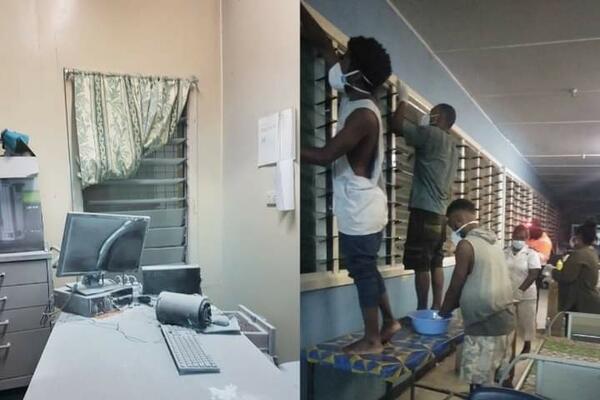 On the left is the office that caught fire and NRH staff and helpers cleaning the ward in the aftermath of the incident.
Source: Supplied
Share
Thursday, 24 March 2022 15:32 PM

The National Referral Hospital (NRH) is investigating a fire incident that occurred at the hospital’s post-natal ward staff office late yesterday afternoon, that forced staff, caregivers, mothers and their babies to evacuate the ward.

Fortunately, all occupants including new born babies at the ward were unharmed with no injuries incurred during the incident.

From initial reports received, the fire started when an electrical water heater at the post- natal staff office room was left on for some time and eventually without water. The fire then started from the heater’s electrical compartment and then spread across the office.

The smoke coming out from the office raised alarm amongst staff and patients who then evacuated the ward immediately and took safety at the hospital’s sea wall.

Fire extinguishers were brought in and used to curb and eventually kill the fire with the RSIPF fire truck on standby outside the building should the fire escalated.

All the mothers and babies were then moved to the children’s ward and further westside of the same ward – caesarean section bay, awaiting assessments and repairs to the post-natal before it can once again accommodate postnatal mothers and new born babies.

NRH CEO said that this was an unfortunate situation, that the hospital is seriously investigating looking into to ensure that it does not ever happen again.

‘Sincere apologies to all patients the mothers and their babies including family members providing care at the ward for the incidence’, said Dr Malefoasi.

Last year officer from fire department did an assessment with the hospital’s Occupational Health and Safety team and among other things recommended purchase of 96 fire extinguisher.

Hospital is procuring few at a time and positioning them in strategic sites across the hospital.