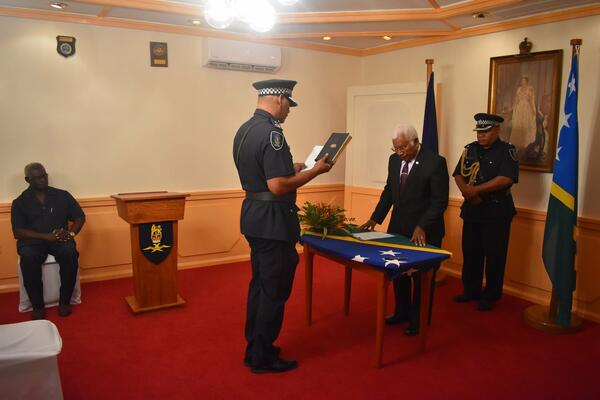 The newly appointed Commissioner of the Royal Solomon Islands Police (RSIPF) Mostyn Mangau feels very humbled by his new appointment and pledges to serve the people of Solomon Islands.

The appointment of Mr Mangau as the Commissioner of Police was done by the Governor-General, acting in accordance with the advice of the Prime Minister tendered after the Prime Minister has consulted the Police and Prisons Service Commission as conferred under section 43 (2) of the SI Constitution.

Mr. Mostyn was among the five applicants including two from overseas who applied for the position. The position became vacant when the former Commissioner Matthew Varley completed his term in 29th November 2019. Mr Mangau has been Acting Commissioner since Mr Varley vacated the position.

His Excellency the Governor General, Sir David Vunagi administered the Oath of Office for the new Commissioner of RSIPF Mr. Mangau during a brief ceremony at Government House in Honiara this morning.

“I feel very humble to have been appointed to this very important position as Commissioner of the RSIPF especially as this is the first time a local Solomon Islander has been given the position after it has been held by foreign nationals for the past 19 years.

“My appointment as Commissioner is an expression of the confidence our Government and people have in the more than 1,500 officers in the RSIPF. We have come a long way since the dark days of the social unrest which brought not only the country but also its police force to its knees.”

“With the assistance from Australia and New Zealand as well as the Pacific island countries under the banner of the Regional Assistance Mission to Solomon Islands (RAMSI), the RSIPF has become a more professional police force striving to maintain high integrity and the confidence of the people it has been mandated to serve,” says Commissioner Mangau.

He adds, “As the new Commissioner of ‘Polis blo iu’, I pledge to do all within my powers stipulated under the Police Act 2013 to provide a safe and secure environment for all citizens of Solomon Islands maintaining the independence of the RSIPF from any political interference.”

“I appeal to all officers of the RSIPF, the national and provincial governments, community leaders, women and youth and all the citizens of this country to support me as I take on this highest leadership role in our country’s police force. With your support and that through the hands of our Almighty God we will continue to maintain the Hapi Isles status that our beloved nation has become known throughout the region and the world.”

Commissioner Mangau, who joined the RSIPF in July 1996, has held several executive positions before being appointed as Commissioner. This includes:

Commissioner Mangau has undertaken leadership training at both the Australian Institute of Police Management and the Royal New Zealand Police College and holds Certificates in Leadership Development.