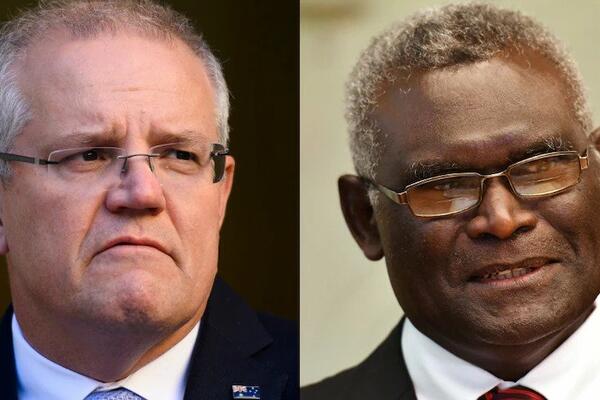 "Of course we haven't threatened [to invade]," Mr Morrison said. "We are their primary security partner. We are their first call when they face these sorts of challenges."
Source: ABC
Share
Friday, 06 May 2022 11:07 AM

Scott Morrison says the government will take a "calm and composed" approach to Solomon Islands if re-elected, after its Prime Minister launched a tirade in parliament about Australia's response to its new security pact with China.

Solomon Islands Prime Minister Manasseh Sogavare on Tuesday suggested Australia and its allies were deliberately trying to undermine his government, criticised the Western response to Russia's invasion and praised China's treatment of Christians.

He also seemed to suggest that an invasion of Solomon Islands was being considered by Australia, something no federal government figure has publicly raised the prospect of.

This morning, Mr Morrison denied the prospect, saying Australia had sent police officers during last year's unrest at the request of Mr Sogavare.

"Of course we haven't threatened [to invade]," he said. "We are their primary security partner. We are their first call when they face these sorts of challenges."

Mr Morrison said Solomon Islands was part of Australia's Pacific family and the government was concerned for it.

"Prime Minister Sogavare has entered into a secret arrangement with the Chinese government. He has done that with a number of his cabinet ministers.

"That didn't come as a surprise to our government and now we just work responsibly with our partners to manage that situation, to first protect the security interests of Australia but also of the Solomon Islands."

Mr Morrison was asked what was stopping him from calling Mr Sogavare and trying to de-escalate the situation.

"I can tell you clearly, I am following carefully the advice I get from our security intelligence agencies in how we are responsibly managing the issues in relation this matter," he said.

Shadow Foreign Affairs Minister Penny Wong said she was surprised that Prime Minister Scott Morrison had not spoken to the leader of Solomon Islands since he signed the controversial security deal with China.

"Quite a lot of the way in which Prime Minister Morrison has dealt with this issue has surprised me. I think Australians have been surprised," she said.

Ms Wong said she looked forward to speaking to Mr Sogavare if Labor were to win the upcoming federal election.

"I think it is quite clear that there is going to be a lot of work required and will take a fair bit of time, given where the relationship with Prime Minister Sogavare [is at]."

The security pact between Solomon Islands and China has caused concern for a number of nations, including Australia and the United States.

There are fears that the deal could see China establish a military base on the Solomons, something Mr Sogavare has insisted will not happen.

Both Mr Morrison and US figures have declared a base would be a "red line" and they would respond accordingly if moves were ever made to create one.