More Victims Ready to Testify in Next Hearings 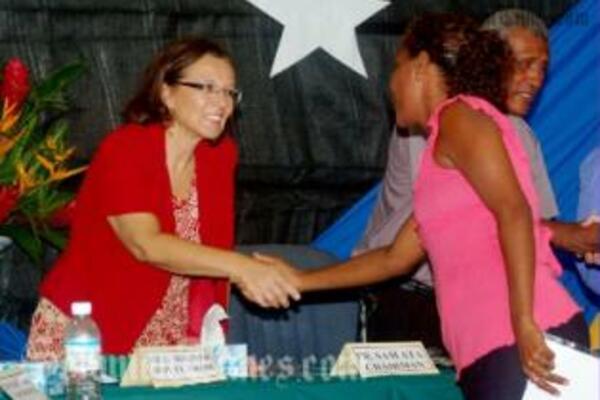 Sofia Macher greeting one of the victims (Serima Jas) after her testimony.
Source: Photo supplied
Share
Thursday, 11 March 2010 11:27 AM

The first public hearing by the Solomon Islands Truth and Reconciliation Commission (TRC) concluded yesterday, with 19 witnesses giving sometimes wrenching personal testimony on their experiences during five years of civil conflict known as the "tension".

Witness testimonies revealed the breadth of their anguishing experiences. Among them were Mrs. Pretty Rose Proctor from Choiseul Island who lost her husband, her brother and her niece in the tensions; Benedict Maisura, whose father was brutally attacked and tortured by militants; and Maria Odilia from Guadalcanal, who was attacked by militants because she married a man from Malaita.

Throughout the two-day hearing, there were consistent calls for perpetrators to have the courage to come forward to tell their story. "We will definitely invite them to testify," said Father Samuel Ata, chair of the TRC. "It is very important, because the perpetrators do also need healing."

Father Ata said he has already received several requests from additional witnesses volunteering to testify at future public hearings. Seven more public hearings will be held by the TRC in 2010, with the next hearing on the island of Malaita in April.

The Minister for National Unity, Reconciliation and Peace, Mr. Sam Iduri, expressed delight at the progress achieved during the hearing. "The level of public support and interest has far surpassed the ministry's expectations," he said. "We are very pleased with the achievements of the TRC thus far."

The TRC is an independent body formed to look into the root causes of the tensions, and to promote reconciliation. It comprises three national and two international commissioners. Its primary function is to promote national unity and reconciliation. The commissioners are: Fr. Sam Ata of Solomon Islands (Chair); Ms. Sofia Macher of Peru (Deputy Chair); Mr. George Kejoa of Solomon Islands; Mrs. Carolyn Laore of Solomon Islands; and Ratu Joni Madraiwiwi of Fiji.cIt began work on 15 January 2010, after being launched the previous year by former Archbishop Desmond Tutu of South Africa.

"The Solomon Islands TRC provides an ideal forum, at which the first steps towards national healing can be taken", said Knut Ostby, UN Resident Coordinator and UNDP Resident Representative. "It is very positive that there is so much early support for these efforts".

Financial and technical support for the TRC has been provided by a number of contributors, including the Governments of Solomon Islands, Australia and New Zealand; the European Commission; the International Centre for Transitional Justice; the Office of the High Commissioner for Human Rights; and the United Nations Development Programme.