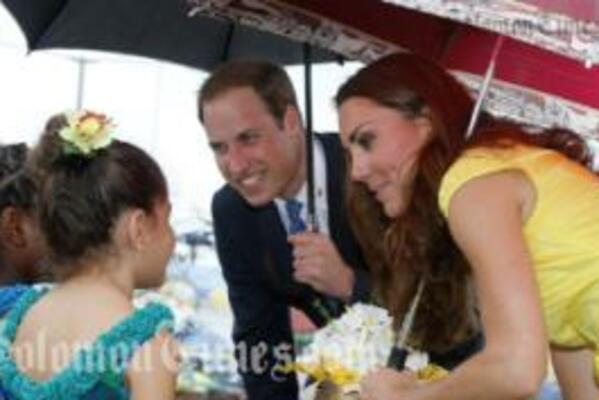 The Royal Couple during the opening of the Commonwealth St yesterday.
Source: http://news.ripley.za.net
Share
Tuesday, 18 September 2012 08:59 AM

The Duke and Duchess of Cambridge began their day yesterday by calling on the Solomon Islands' Prime Minister and his Cabinet where they were given a traditional shell money necklace by the politician.

Gordon Darcy Lilo warmly welcomed them to the government building before presenting them with the gifts bearing their names - Prince William and Princess Kate.

Made of tiny colored sea shells woven together, they formed a piece of jewellery which resembled a mayor's chain of office.

As the Prime Minister placed the gifts around their necks, the Duchess said: "That's very smart", and the Duke replied: "It is smart."

Speaking about the presents, the Solomon Islands' leader told the royal visitors:

"That will show that the whole of this country is very much part of you."

And when the trio posed for a picture, the politician joked that the photograph would allow the Queen "to see you're here", and the Duke added: "Checking up on us."
The group then moved to the Cabinet Room where the ministers were arranged along one side of a huge table waiting to meet the royal couple who then chatted to each person in turn.

Before leaving, William took a seat at the head of the table for a group photograph flanked by the Prime Minister and Kate, dressed in a yellow Jaeger dress, with the ministers behind.

The Duke made the group laugh by banging the table with his hand and saying: "Where's the agenda?"

The Duke and Duchess of Cambridge then met with traditional performers when they toured a cultural village exhibition at Panatina, showcasing the unique arts, music and culture found in the nation's nine provinces.

The Duke and Duchess of Cambridge came face to face with a group of topless Solomon Islands women yesterday and did not bat an eyelid when introduced.

Wearing just a few banana leaves as a makeshift top the group performed a dance with men from their region as they showcased their culture for the royals. Their exposed breasts are a normal part of life in the Solomon Islands' province of Choiseul, where the women are from, and they happily chatted to William and Kate who seemed completely at ease in their company.

One man among their group had a greeting written in pidgin English painted on his chest for the royals - Welkam Wills and Kate.

William and Kate were animated and looked relaxed throughout their visit and appeared to have moved on from the furore surrounding the publication of topless pictures of the Duchess, taken while on a private holiday in France last week with William.