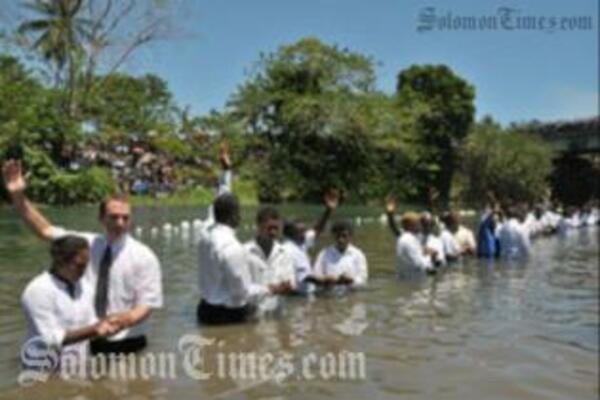 In the largest Seventh-day Adventist baptism in Solomon Islands history, hundreds of people joined the church during a public outreach series this month by evangelist John Carter.

Adventist pastors baptize new church members in the Lunga River near Honiara, Solomon Islands, on September 17 while onlookers watch from shore. More than 500 people chose to join the church during a public evangelism series in the South Pacific this month. [photos courtesy SPD]

More than 500 people were baptized in the Lunga River near Honiara on September 17 while men with poles stood nearby to push away any crocodiles that swam into the area. Some 10,000 people stood on the riverbank and a nearby bridge to witness the ceremony.

Most of the people baptized had come forward during two altar calls at Carter's meetings, which began September 9 at a soccer stadium in Honiara. Carter spoke about the latest discoveries in astronomy and scientific evidence for the existence of a Creator.

At Sunday night's final meeting, attendance peaked at 32,000, one-third of the city's population. About two-thirds of those attending were not Adventist church members, church leaders in the South Pacific said.

The meetings took the city by storm, said Solomon Islands Prime Minister Danny Philip, who spoke at the final meeting.

"The church in the Solomons has been praying for revival and it is a joy to see first hand God's spirit sweeping across this nation," said Wayne Boehm, president of the Adventist Church in the islands.

"I continue to hear of miraculous stories of people attending these meetings, some of whom have been keeping the Sabbath on their own ... now coming to these meetings to have their faith affirmed," he said.

Some 32,000 Honiara residents attended the final night of evangelist John Carter's outreach series in the Solomon Islands this month.

One newly baptized member is the now former president of a Protestant denomination in the Solomon Islands.

"We praise God for the large and enthusiastic attendance at the evangelistic meetings," Adventist world church President Ted N. C. Wilson said later in an interview. "It's obvious that many are being drawn to ... the Bible and its answers for today's many problems. Truly, Jesus is the only answer to the challenges we face in today's highly unsettled world," he added.

Many of the newly baptized members are expected to attend a new church this Sabbath at Adventist-owned Maranatha Centre in the Solomon Islands, said Boehm.

The church in the Solomon Islands plans to establish a radio network so every person in the region can continue to hear the church's message.