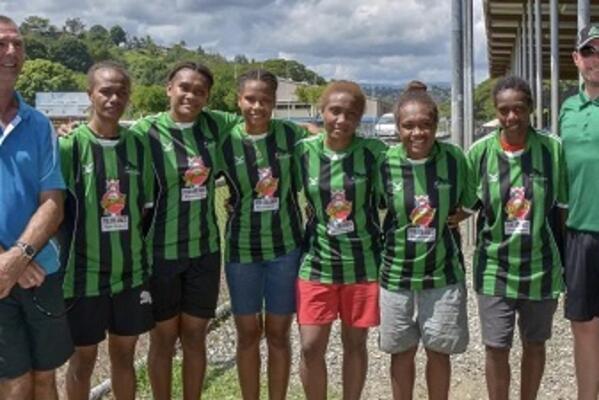 The Monary Panthers boss has identified six players he was interested in signing to his team.
Source: smh.com.au
Share
Monday, 01 April 2019 07:46 AM

The Monary Panthers have recruited three Solomon Islanders in a bold bid to jump from cellar-dwellers to finals contenders in the women's Canberra premier league this season.

Worthington was invited to the Solomon Islands to watch a national team training camp and the Panthers boss identified six players he was interested in signing.

"Ian Shaw has worked with the Solomon Islands national team for the past few years and he discussed with the club about opportunities for a few of these girls to come over and extend their football education in Australia," Worthington said.

"The national team was training for a World Cup qualifier back in November and we were invited to go and watch two training sessions.

"We watched two in-house games and identified the strongest players who we wanted to sign.

"We picked six players initially then when we got into the finer details of getting over here, three could come across."

The trio will miss the first three rounds before they arrive in Canberra on April 15, but Worthington said the signings have already caused plenty of excitement around the club.

"They’re tenacious, hard-working, honest and they have a raw ability to want to learn all the time. They'll also enhance our developing younger players."

Monaro finished second from the bottom last season but Worthington believes his squad is now capable of breaking into the top four.

"I'm very excited and looking forward to the season. We've got some really good youngsters coming through and have been fortunate that some of our better players have remained with us instead of going elsewhere," Worthington said.

"We already had quality in the squad and our signings will only enhance our depth. We feel confident in our local players as well as those we’re bringing in."

The Panthers will open their season against Canberra Olympic at the resurfaced Riverside Stadium on Saturday afternoon.

Wagga City Wanderers will make their league debut at home against Tuggeranong United on Sunday, while Gungahlin United have the bye.