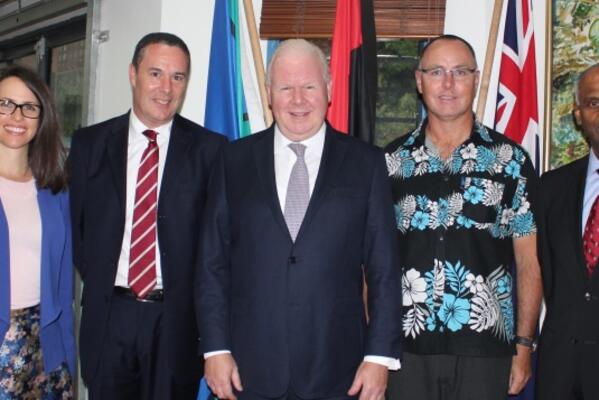 ANZ has announced an agreement with the Australian Government to support the increased roll out of mobile banking and financial literacy programs to a further 65,000 Solomon Islanders previously excluded from traditional banking services.

As part of this partnership, the Australian Government will provide additional funding to assist ANZ to improve access to phone banking in remote areas as well as delivering dedicated financial literacy training, with a particular focus on women in rural communities.

Commenting on the agreement in Honiara, ANZ Chief Executive Officer, Mike Smith said: “This partnership will significantly assist in accelerating banking services and improve the financial literacy of a significant number of Solomon Islanders previously excluded from traditional banking.

“We know that around 70 per cent of people here in the Solomon Islands don’t have access to banking services, making financial inclusion a priority given the role it plays in building individual and community prosperity,” Mr Smith said.

The Australian High Commissioner to the Solomon Islands, Andrew Byrne, said: "I am pleased to announce Australia’s support to ANZ for the expansion of branchless banking services and financial literacy through goMoney. Our target is to reach 65,000 people in Solomon Islands over the next three years. This support will help achieve the goal of increasing access to financial services to rural and remote Solomon Islanders, particularly women.”

Both parties acknowledged the key role played by the International Finance Corporation in facilitating the agreement and look forward to working with the IFC during implementation.

ANZ goMoney was the first mobile phone banking channel in the Solomon Islands. Since its launch in September 2013, it has attracted 17,000 new customers, including 10,000 customers who had previously never held a bank account.

ANZ’s program is aligned to the Australian Government’s goals of financial inclusion, remittance and private sector economic development, which are in turn aligned to the objectives of the National Financial Inclusion Task Force (NFIT). These will assist in the Australian Government’s broader objective of bringing basic financial services to one million unbanked Pacific Islanders, half of whom will be women.