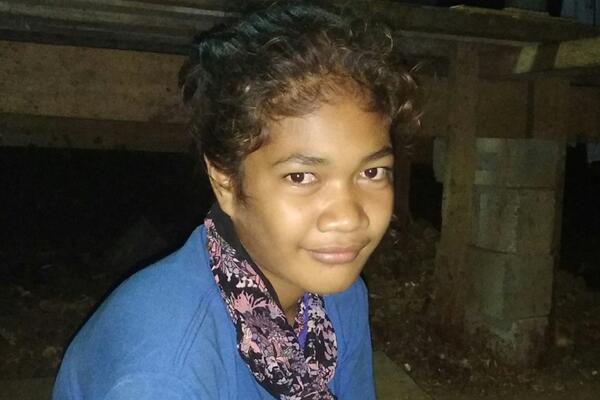 14-year-old girl Fabrina Roto has been found, arrangements are being made to bring her back to Honiara.
Source: Supplied
Share
Thursday, 01 August 2019 09:39 AM

14-year-old girl Fabrina Roto, who has been missing since July 16, has been found.

Officers of the Royal Solomon Islands Police Force (RSIPF) at the Malu’u Police Station in North Malaita yesterday arrested an adult man who is alleged to have abducted the 14-year-old girl at the kukum area in Honiara.

“My frontline officers and members of the Provincial Response Unit at Malu’u arrested the man at Tolomataga Village in the Suava area of North Malaita after an early morning raid on a house where we believed the suspect and the missing girl were accommodated in that Village,” says Inspector Peter Kinita, Officer-in-Charge of the Malu’u Police Station.

Inspector Kinita explains: “Both the suspect and the young girl were asleep when the police officers went to the house. The suspect did not resist arrest. Both were brought back to Malu’u Police Station before being transferred to Auki by road as arrangements are underway to transport both to Honiara.”

“We became involved in this case after we were informed that the suspect and the girl had travelled to North Malaita from Honiara. We visited several villages yesterday (30 July 2019) but then we received information that both were seen at Tolomataga Village. We decided to go there early this morning to surprise especially the suspect.”

“I wish to sincerely thank members of several communities in North Malaita for their great assistance in supplying information which led to the successful apprehension of the suspect and of cause the 14-year-old girl. I was able to get in touch with the parents of the girl this morning and released the good news that we have been able to find their daughter and she is well,” says Inspector Kinita.

Meanwhile, the Provincial Police Commander (PPC) Malaita Province, Superintendent Solomon Sisimia appeals to the general public especially to young girls not to go out with any person without prior knowledge of his character and background.

“And I want to inform the public that taking any person with or without her or his consent for the purpose of committing illegal actions with them is a serious offence. I wish to thank the communities in North Malaita with their leaders for supporting the police with this matter,” PPC Sisimia emphasises.

The appropriate charges will be laid against the suspect after further investigation by police in Honiara City where the alleged abduction of the 14-year-old girl happened.

Police officers at the White River Police Post in West Honiara started searching for the 14-year-old girl Miss Fabrina Roto after her parents reported her as a missing person since she was last seen between 9pm - 10pm on 16 July 2019 inside the Scorpion Pub at Kukum in East Honiara. A photo of the girl was sent out by the RSIPF Police Media Unit and posted on Facebook.