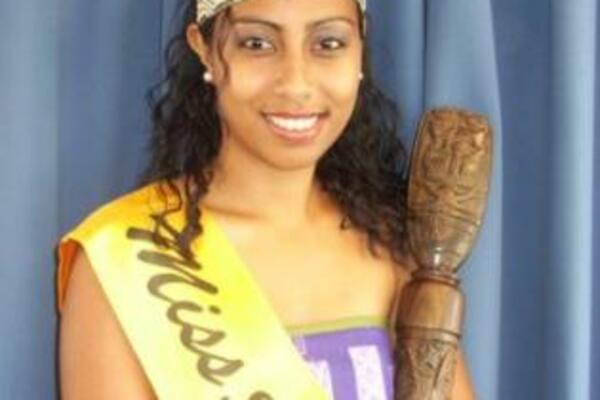 "I hope we will work on helping our stakeholders to combat it, simply by providing awareness to it," said the current Miss Solomon Islands, Rabobo Toma.
Source: Photo Supplied
Share
Friday, 27 August 2010 13:02 PM

On Tuesday the 31st of August, 2010, the current Miss Solomon Islands 2009, Rabobo Toma, in collaboration with the Henderson Hammerheads Rugby Club will host a Trivia Night at the King Solomons Bamboo Bar.

The Trivia Night is a charity fundraiser in aid of the Christian Care Centre, the only refuge for women and children who are victims of violence or abuse in Solomon Islands.

The Centre was a vision of the Late Sr. Lillian Maeva, an Anglican sister, who saw the need of a refuge for victims of abuse prior to and during the ethnic crisis. Since then, it has extended to its current location at Tenaru and is continuously managed by the Sisters of the Melanesian Church, with Sr. Margaret Rosa as its Coordinator. Besides the provision of a safe house, the services at the Centre include; counseling, spiritual guidance and advocacy to court processes.

"Domestic Violence is a growing concern in the Solomon Islands and although we know we cannot immediately solve the issue, I hope we will work on helping our stakeholders to combat it, simply by providing awareness to it," said the current Miss Solomon Islands, Rabobo Toma.

According to a 2009 Study on Violence against Women and Children, there is a high prevalence of violence against women in our country. The report also states that two in three women aged between 15-49 who has had a partner, has experienced violence. These statistics continue to bring concerns to stakeholders in the Solomon Islands.

"As a team of young enthusiastic men, we have always wanted to do work for Charity," says the Henderson Hammer Heads Rugby Club President, James Moore.

"This is a good opportunity to raise funds for the Christian Care Centre, to support the great work done there. We hope to see people come out to support this worthy cause. Not only would this night be that of fun, but it would be aimed at providing awareness on the important issues of Domestic Violence in the country."

With word already out in the streets, many are already enquiring about registering their teams for the Trivia Night. Teams should have a maximum of six people per team. For team registration, you can contact 7473783 before Monday 30th of August. The event is expected to run from 6pm-9pm, with exciting prizes up for grabs. For those wanting to support, the entrance fee stands at $20. Any form of donation for the Christian Care Centre will also be collected on the night.