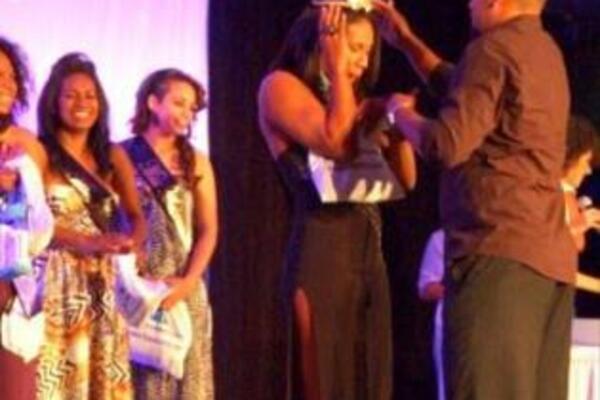 The Inaugural Miss Melanesia Australia 2010 was a roaring success, with beautiful representatives from around Melanesia flaunting their unique talents and attires to an appreciative crowd at the Sebel Citigate hotel's Presidential Ballroom, in Brisbane's CBD.

There were a total of 12 stunning contestants from Fiji, Vanuatu, Solomon Islands, Papua New Guinea, New Caledonia and the South Sea Islands. The women competed with style and dignity through the different categories such as speeches, dance, traditional wear and evening gown.

The theme for the night was "Domestic Violence," an important theme that sought to raise awareness on this important issue. Television presenter and producer with the Australian Network, Tunia Nugent, was the pageant host.

Despite the seemingly close contest, the decision was in the hands of the three judges, Shena Pinto, editor of UNEEK magazine, major Papua New Guinea musician, Moses Tau and supporter of Miss Melanesia Australia, Floyd Smith. The judges acknowledged that it was closely contested with the winners having a slight lead in the traditional attire and speech.

The crowd roared in excitement as the representative for Papua New Guinea, Anna-Liza Mopio-Jane, received the winning crown for the Miss Melanesia Australia 2010.

Miss Mopio-Jane's stand out performance was her unique traditional wear and speech. Viv Wickham from Solomon Airlines had the honour of presenting Miss Mopio-Jane her winning crown.

Elle Kraus, aged 20 years, representative for Solomon Islands with mixed heritage from Fiji and Papua New Guinea happily took second place. "This was an unbelievable experience as out of all the different cultures, I was chosen as runner up." She further emphasized that the most important thing for participating in the event was to bring different Melanesian cultures together. Papua New Guinea, Central Province came in third place.

The Miss Melanesian beauty pageant had achieved what it set out to do and that is uniting Melanesian people together in support of their true culture, tradition and working hard to confront domestic violence.

Entries are already in for the next Miss Melanesia Australia including sponsorship offers for 2011.