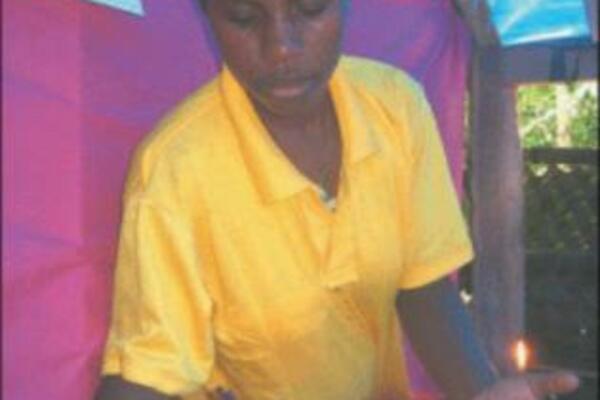 19 year-old Mary Kuna with the bleeding crucifix in a cup at her home. Picture by John Pangkatana
Source: Post Courier Online
Share
Tuesday, 31 March 2009 07:04 AM

A small bleeding and sweating statue of Jesus is being deemed a miracle in Papua New Guinea as many flock to see the sight for themselves.

As reported by John Pangkatana of the Post-Courier Online, thousands of people are flocking to a little village known as Balada village in the Bitapaka Local Level Government area of East New Britain, PNG, to witness what has been deemed as a miracle, the dripping of blood and sweat from a statue of Jesus.

According to the report, people are coming 'from all over the province to hear the story from 19-year-old Mary Kuna, who is believed to have witnessed blood pouring from a statue of Jesus on the cross since Friday March 20 around midday in her family home'.

The following excerpt is taken from the article published by the Post-Courier:

The Post-Courier yesterday visited the family and found that a temporary shelter had been built for people to come and pray and judge for themselves whether to believe in what they saw or not.
Ms Kuna, who is a member of a youth prayer group, said she was reciting the chaplet of divine mercy and rosary at the time it happened.
"While I was praying I heard a noise like a rat crawling around the roof, so I didn't take much notice.
"Then the noise started getting louder which disturbed me," she said. "When I went to check the noise it was coming from a closed plastic bag which had a new Jesus crucifix inside that I was given as a gift from friends in Wewak,"Ms Kuna said.
"When I looked at the plastic bag I noticed that there was a reddish liquid forming inside.
"The sight of it scared me and made me numb and I didn't know what to do," she added.
Ms Kuna then opened the bag and poured the contents from the Jesus crucifix into a cup.
She said she knew that she had to go and tell someone about it."My dad didn't believe me and waved me away and continued to tend to his cocoa trees," she said.
She then went to tell her friend Josephine from the prayer group.
"When we opened the door to the room there was a strong odour like the smell of blood from a hospital.
"The cup was also still filling up and had to be emptied," Ms Kuna said. From there the news spread like wild-fire in the nearby community.
She believes it is a miracle and should be shared with everybody. People coming with their own water bottles were given portions of the water to take home as well.
They had also asked a Catholic auxiliary bishop to see for himself, and it is alleged that he has declared it a miracle.
By yesterday, she said water and blood was still flowing together.