Ministry of Foreign Affairs Clarifies Use of Diplomatic Pouch 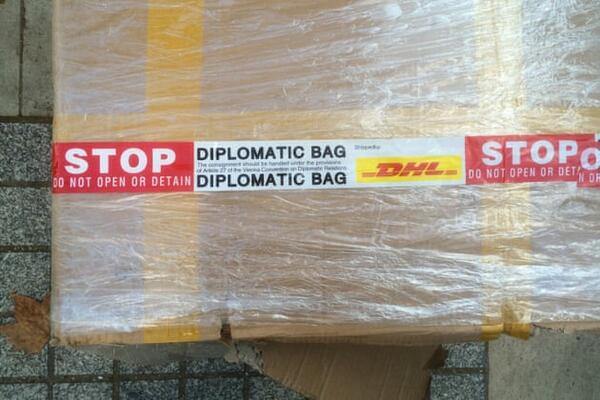 An example of what a diplomatic bag looks like - the "bag" has diplomatic immunity from search or seizure, as codified in Article 27 of the 1961 Vienna Convention on Diplomatic Relations.
Source: The Guardian
Share
Tuesday, 23 June 2020 08:24 AM

The Ministry of Foreign Affairs and External Trade (MFAET) explains that the use of diplomatic pouch or bags is governed by the Vienna Convention on Diplomatic Relations.

This is in response to the recent incident where the address on a package was alleged to have been mailed from the Taiwan’s Ministry of Foreign Affairs to an individual in Solomon Islands.

MFAET says Solomon Islands has passed local laws, thereby domesticating the Vienna Convention on Diplomatic Relations. The statement says this was done under the First Schedule of the Solomon Islands Diplomatic Privileges and Immunities Act.

MFAET explains that Under Article 27 of the Vienna Convention on Diplomatic Relations, the host country must permit and protect free communication between the diplomats of the mission and their home country.

“A diplomatic bag, also known as a diplomatic pouch, is a container with certain legal protections used for carrying official correspondence or other items between a diplomatic mission and its home government or other diplomatic, consular, or otherwise official entity.

“Additionally, a diplomatic bag usually has some form of lock and/or tamper-evident seal attached to it in order to deter or detect interference by unauthorized third parties,” the statement reads.

MFAET says that the most important point is that as long as it is externally marked to show its status, the "bag" has diplomatic immunity from search or seizure, as codified in article 27 of the 1961 Vienna Convention on Diplomatic Relations.

It may only contain articles intended for official use. It is often escorted by a diplomatic courier, who is similarly immune from arrest and detention.

MFAET emphasizes that the use of diplomatic pouch can only be done between States.

MFAET says that any reason as to why Taiwan or any entity that transmitted the boxes decided to override the diplomatic pouch privilege is for reasons known to them only.