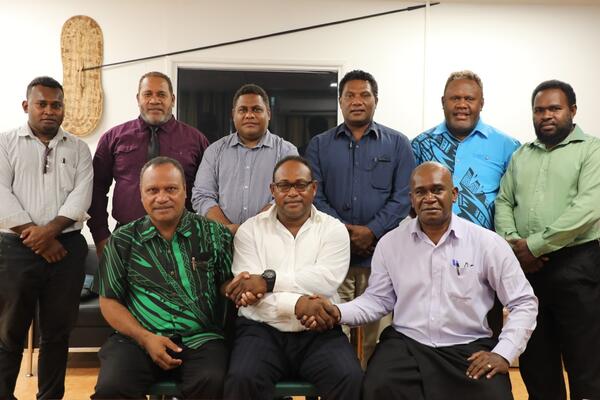 An official statement outlining the outcomes of the meeting will be released soon.
Source: Supplied
Share
Wednesday, 13 May 2020 07:21 AM

The Minister for Provincial Government and Institutional Strengthening (MPGIS), Rollen Seleso and Malaita Premier Daniel Suidani have resolved recent differences during a meeting in Honiara yesterday.

Minister Seleso invited Premier Suidani and three members of his Executive to sort out recent misunderstandings which were sensationalized by the print media.

The leaders have expressed their views and have reached a common understanding on issues raised which forms the way forward for further dialogue.

Premier Suidani insisted that his government did not do anything wrong to warrant such a warning, stating in a strongly worded press statement that if the Sogavare Government cares about good governance and leadership as required of mandated leaders, then his government is doing just fine in that department.

An official statement outlining the outcomes of the meeting will be released soon.