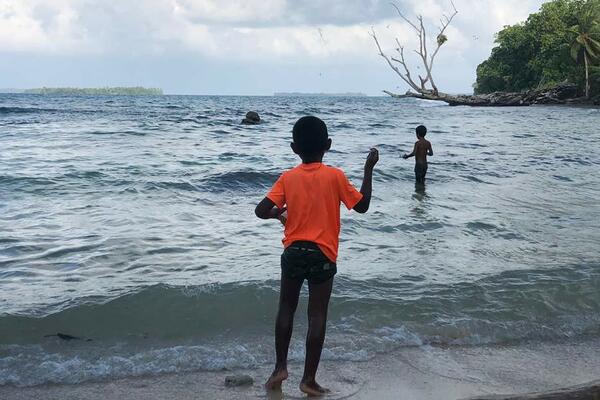 Some residents of Kukson and Nikamuroo villages and Benyamina islet told Amnesty International that they are concerned about the possible impacts from mining on fishing and sea-weed farming from mine run-off or disturbances to fresh groundwater discharges into the sea.
Source: Supplied
Share
Tuesday, 10 December 2019 06:04 AM

The Solomon Islands Minister of the Environment should conduct face-to-face consultations with local communities on Wagina Island to hear their concerns before deciding the fate of a proposed open-cast bauxite mine there, Amnesty International said today.

The Minister is expected to decide soon whether to uphold a March 2019 Environmental Advisory Committee (EAC) decision that overturned the mining licence, after residents raised fears it could impact livelihoods on the island.

“The Solomon Islands government must ensure that all affected communities are genuinely and meaningfully consulted about this proposal,” said Richard Pearshouse, Head of Crisis and Environment at Amnesty International.

“The Minister should sit down with local communities on Wagina Island and hear their concerns.”

Wagina Island is a remote island of approximately 80 km2 in north-west Choiseul Province. Its residents are originally from Kiribati, having been relocated in the early 1960s by the British colonial administration. Estimated at around 2,000 people, they live by subsistence farming, fishing and seaweed farming.

In 2013, the Ministry of the Environment granted a Solomon Islands-registered company, Solomon Bauxite Limited (SBL), a permit to mine bauxite on Wagina Island. The following year, Wagina residents opposed the mine in the country’s High Court, which issued a stay of proceedings so that the case could be heard by the EAC.

In March 2019, the EAC overturned the Ministry of Environment’s consent for the mine. The EAC found that the Environmental Impact Statement (EIS) for the proposed mine – which is required under national law – had insufficient information to assess the impacts of the proposed mine, and that the legislative procedures for public consultation and publication of the EIS were not followed.

SBL has appealed the EAC’s decision to the Minister of the Environment. In meetings and correspondence with Amnesty International, the company has stressed that it has always complied with the laws applicable to its operations and has acknowledged the importance of upholding human rights.

Amnesty International visited Wagina Island in July 2019 and interviewed a dozen islanders about their concerns, as well as 10 others familiar with the issue, including representatives of national and provincial governments, civil society organizations, journalists and lawyers. The organization also reviewed background documents, including meeting minutes and a copy of the 2012 EIS and its 2013 supplement.

“There is much apprehension about the potential environmental and social impacts of this mine and many community members told Amnesty International they did not feel sufficiently informed or consulted about it,” said Richard Pearshouse.

Some residents of Kukson and Nikamuroo villages and Benyamina islet told Amnesty International that they are concerned about the possible impacts from mining on fishing and sea-weed farming from mine run-off or disturbances to fresh groundwater discharges into the sea.

The EIS states that: “The [residents of Wagina] do not currently use either the mine or the processing facility sites for any productive purpose.” However, some residents told Amnesty International they use some of the land covered by the proposed mine for purposes including gardening and harvesting timber for housing.

“The government of the Solomon Islands needs to resolve the issues of land ownership and use on this part of Wagina. Taking away land that people occupy and use without following due legal process runs the risk of forced evictions,” said Richard Pearshouse.

According to the EIS, the development will include an open pit mine, a bulk carrier wharf and small boat wharf, airstrip, administration offices, a power station, fuel farm, and accommodation for about 150 employees (who with family members may reach 1,000 people). The proposed mining involves trucking approximately 150 truckloads of bauxite, each with a 35 to 50 tonne payload, for 16 hours each day. The proposed life of the mine is between 16 and 20 years.

A consultation meeting on the proposed mine was held in Kukson village in February 2013. Official government minutes from that meeting show only 23 villagers attended and that no-one attended from Nikamuroo (the village closest to the proposed mine). The EAC found deficiencies in the process of raising public awareness about this consultation meeting and the application for a licence.

Wagina residents told Amnesty International that four copies of the 2012 EIS were sent to the Island after the February 2013 consultation meeting. The 2012 EIS was supplemented by another EIS in June 2013, approximately four months after the meeting in Kukson. According to Amnesty International’s interviews with residents of Wagina, no consultation meetings took place to discuss this new information.

“The absence of full, accurate and timely information and the lack of any follow-up on questions raised by those who were able to attend the one consultation meeting, raises concerns about whether the engagement with affected communities can be considered genuine or meaningful,” said Richard Pearshouse.

The Minister’s review should include checking the date of any meetings with affected communities, where the meetings took place, whether all sections of the community – including women and those who cannot read – could participate effectively, what language meetings were held in, what advance notice and information was given, and what specific issues were discussed.