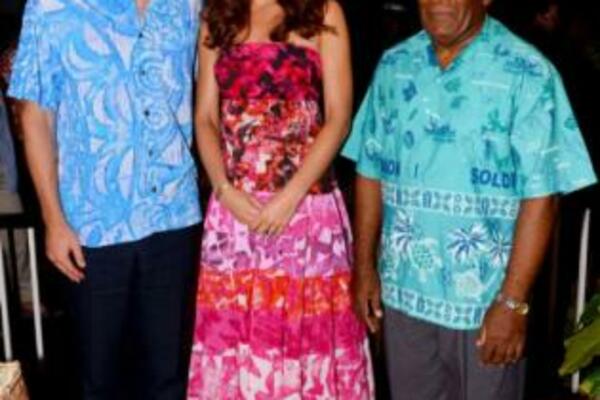 'Catherine and I were overwhelmed with the warmth of the reception we received this afternoon. Our expectations were pretty high after what the Queen had told us, but nothing had prepared us for the
Source: dailymail.co.uk
Share
Monday, 17 September 2012 08:21 AM

The Duchess of Cambridge had a last-minute change of wardrobe when she ditched plans to wear to the banquet a dress she had brought from London and chose instead one that she had just been given by her Solomon Islands hosts.

She made the switch just half an hour before the banquet when she walked into her room at the hotel in Honiara and discovered that the government had left her a strapless dress with a bright pink and orange batik design.

'She tried it on, she loved it and she is wearing it," said a royal aide. The dress came from a shop called Island Print.

In keeping with island tradition the Duke also wore a colourful shirt. His also was a gift from his hosts - but contrast with his wife he knew it was coming because the Solomon Islands had gone so far as to check his size in advance.

The Duke was clearly taken with his new blue shirt. In a formal visit on the Governor-General, Sir Frank Kabui, the Duke told him: 'I have my shirt on. What do you think? Looks OK?'

The couple were also obviously struck by the warmth and enthusiasm of their welcome to Honiara. The Duke told Sir Frank that there had been 'a lot of energy, a lot of screaming... it was great.'

The Duchess told the Governor-General's wife Lady Grace: 'It was a beautiful service earlier. All the singing - it was lovely.'

As a sign of what a good mood the couple were in, as the couple joined the diners at the island feast they agreed to pose for pictures for the waiting British press photographers. 'As you asked so nicely,' said the Duke, 'of course.'

During the dinner the couple were entertained by musicians including a choir and the Haguelu Pan Pipers, who performed on a stage clad in grass skirts with white body paint and beads around their heads.

In his speech the Duke tried his hand at pidgin English. 'Mifala barava Tagio tumas,' he said - 'We thank you very, very much.'

Describing their visit as 'a great thrill'. He said: "This land is the most beautiful place imaginable, and the people of the Solomon islands are amongst the most gracious and friendly we have ever met. The Queen told us this would be so, and as with so much else in her long reign, Her Majesty was absolutely right.

'Catherine and I were overwhelmed with the warmth of the reception we received this afternoon. Our expectations were pretty high after what the Queen had told us, but nothing had prepared us for the welcome we received.'

Back in Britain, William's father the Prince of Wales was joined by the Duchess of Cornwall, Battle of Britain veterans and their families at a service of thanksgiving at London's Westminster Abbey today.

A Spitfire and a Hurricane flew high above the Abbey to commemorate the battle, one of the turning points of the Second World War.

Some 544 Royal Air Force pilots were killed in the bitter struggle to save the UK from invasion, and Winston Churchill famously declared: 'Never in the field of human conflict has so much been owed - by so many - to so few.'

The annual service marked the nation's gratitude for the pilots and aircrew of the RAF who prevented Germany from gaining air superiority in the summer and autumn of 1940.

The Battle of Britain Roll of Honour was escorted to the Sacrarium by airmen who had fought in the battle, and prayers were said for those currently serving in Afghanistan, the Middle East and the South Atlantic.

The head of the RAF, Air Chief Marshal Sir Stephen Dalton, greeted Charles and Camilla as they arrived at the Abbey.

Speaking after the service, he said: 'It's very important from the point of view of passing on the message to the next generation of what these men did in terms of serving their country, their commitment and their courage.

'Today's young men and women also want to serve their country. This is to make sure they understand why this is like a flame, a torch, that is handed on from one generation to another just like the Olympic flame was passed on this year.

'That is the same concept of passing the spirit and the ethos onto the next generation.'