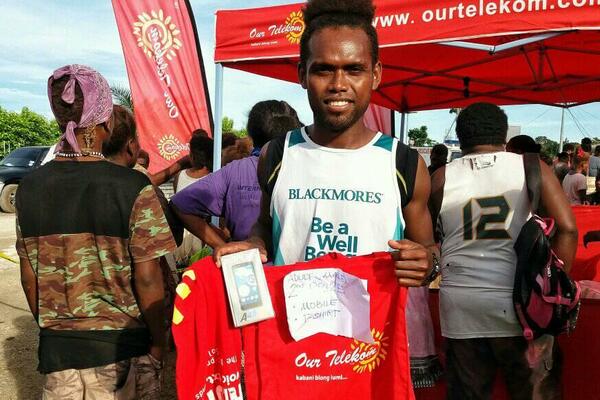 "I heard that monies raised will be donated to Kilufi’i hospital by the event’s organizer," Benjamin says. He says this makes his participation in the race more meaningful.
Source: STO
By Jeremy Gwao
Share
Wednesday, 19 August 2020 10:23 AM

Malaita day this year will go down as one of the best, says Benjamin Lui, a young long-distance runner.

“I set my alarm for 5am that day”, Benjamin says.

Benjamin has a goal to fulfill that particular day. His aim was to participate in the fun run organized by Our Telekom.

With only $20 in his pocket, he left the house. $10 was to go towards registration while the rest will be for his bottle of water.

“I heard that monies raised will be donated to Kilufi’i hospital by the event’s organizer”, Benjamin says.

He says this makes his participation in the race more meaningful.

“I did not plan on winning”, Benjamin says. So it came as such a surprise when he came second.

“I usually did not participate in previous celebrations. But today, because of the donation to the health service here in my province, I also want to donate at least something”, Benjamin says.

Kilufi'i hospital is the third largest hospital in the country.

It was first established by the British Colonial government in 1915.

He says he will remember this event for a long time. He encourages other young people on Malaita to also participate in such events in the future.

"I believe that there a lot of young people in Malaita province who truly are change makers in sports. The province needs you all to be part of such events to be role models for our young ones" he says.

Benjamin acknowledged the sponsor of the event and was grateful for the prize he won.

"I would like to thank Our Telekom for this massive opportunity for us young people in Malaita and for a good cause. We need more from such stakeholders to start to look and find ways that can help improve, especially sports in Malaita Province," he adds.

On that day, Benjamin won himself an Alcatel mobile handset, a shirt and a bag.

The Telekom Fan Run started at 7 in the morning.

"We know that Kilufi’I is the only main hospital for the province. The monies raised will go to the hospital after the event’, Salofeni says.

Other games on that day include canoe racing and a dart competition.

A big number of government MPs and officials attended celebrations to mark the second appointed day in Auki.

Deputy Prime Minister, Manasseh Maelanga was guest of honor to the official celebration.