Media Needs to Be Trained in Conflict Reporting: Singh 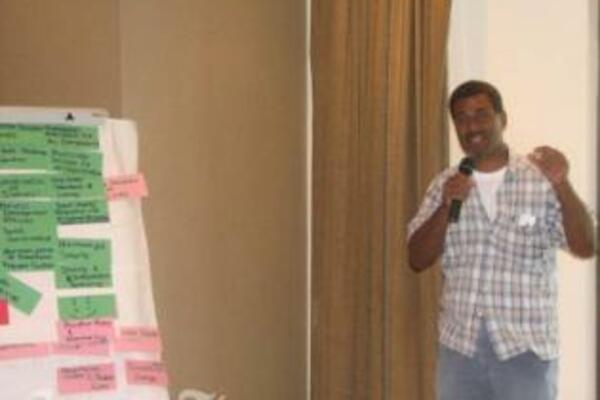 Solomon Islanders from the Government, NGOs and UNDP were also part of the Peace Building workshop.
Source: Solomon Times
Share
Tuesday, 11 May 2010 11:13 AM

Shailendra Singh, the Divisional Head of Journalism at the University of the South Pacific in Suva, said that because reporting conflicts was an integral and important part of journalism, journalists needed training in this area in order to do their jobs professionally and ethically.

He pointed out that the Pacific region was a conflict-prone area, and conflict reporting could not be treated as a mundane, normal assignment which journalists treated merely as a job and became insensitive to.

"Conflict takes a terrible toll, both in terms human suffering and misery and on national development. So news reporting should at the least be well-thought out and measured rather than sensationalized."

"Sensitising our journalists to conflict through training will prevent these kinds of practices and lead to more responsible reporting," he added.

According to Mr. Singh, the masses get their information from the news media and it is crucial for journalists to disseminate information in an accurate, responsible and sensitive manner when it comes to conflicts.

He said that all journalists could benefit from the conflict prevention and peace building concepts and ideas at discussed at the workshop.

"It will do journalists no harm to undergo such kind of training. Our region has had its fair share of conflicts and there is the potential for more conflicts in the future. The media can be a positive rather than a negative influence."

Also attending the workshop was the Co-ordinator of FemLINKPacific, Sharon Bhagwan Rolls, who said that community media had a proven role to play in peace building.

"The potential with community radio is also an opportunity to bring stakeholders together to undertake indepth discussions and deepen the dialogue on critical issues especially when the commercial airwaves don't provide that space anymore," said Ms Rolls.

"There is immense opportunity to incorporate community media and in particular community radio more into the peace and development architecture in our region," she said.

The workshop also heard that building trust between within and between communities was crucial in peace building. It also heard that the media could help build on that trust or damage it.

Mr. Singh said that there was an emerging genre called peace journalism which calls for greater understanding and reporting on the underlying causes of conflict rather than focusing disproportionately on the manifestations of conflict.

But peace journalism was a controversial concept in some circles because it allegedly compromised objectivity, one of the pillars of independent journalism, said Singh.

"My view is that a one-sized fit approach - that conventional form of journalism is suited for all situations, circumstances and countries - is not correct.

"While conventional journalism has many strengthens in terms of exposing corruption, holding leaders accountable and espousing equality for, the focus on conflict and the manner in which conflict is reported is seen to be a problem in fragile, developing nations.

"Fiji, the Solomon Islands or Papua New Guinea are not mono-ethnic societies," said Mr. Singh. Their societies and situations are not same as Australia or New Zealand. So our media needs to be more circumspect and be mindful of our particular position," he said.

The workshop, which ended today, is part of the Strengthening Capacities for Peace and Development in the Pacific project. It's objectives are to further strengthen the cadre of peace practitioners from the Pacific through skills building, up-scaled policy interventions, the regional sharing of good practices and effective peace building mechanisms suited to the Pacific - and through improved access to resources and expertise.