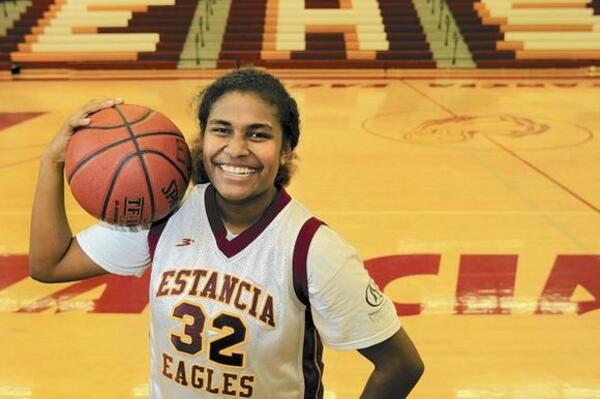 Usually Maya and her twin sister Nefertiti make it at winter break in December. They go back to the Solomon Islands to see their mother, Doreen.

Maya, Nefertiti and their father John left the country when the twins were just 6 years old, and it was understandable why. At the time, the Solomon Islands were in the midst of a Civil War. Doreen stayed behind to care for family.

This winter break, instead of the twins going home to the Solomon Islands, Doreen came to Costa Mesa. She's in town now, and this means a lot to Maya, who is the starting point guard for the Estancia girls' basketball team.

"She's seen me play once in a real gym," Maya said of Doreen. "Sometimes, just on video."

Doreen will be able to see Maya play in person for the next two months. But family members are not the only people who are impressed with Maya Van Den Heever's game.

She is a big reason why the Eagles, ranked No. 7 in CIF Southern Section Division 3A, are off to a 13-2 start. She earned all-tournament team honors last week as Estancia won the Santiago tournament, beating South Hills, 64-54, in the championship game. In the title tilt, she tallied 14 points, five assists, four rebounds and three steals.

It was the second tournament win of the season for Estancia, which captured the CdM Tip-Off Tournament in early December. Nefertiti is out this season with a torn ACL, but Maya is seemingly producing enough for both twins.

Coming into Friday's nonleague game against Rancho Alamitos, she was second on the team in scoring (9.9 points per game) and first in assists (5.0). Maya also was third on the team in steals, with 3.1 per contest.

She wears No. 32 like Magic Johnson, and that's not an accident, as Eagles Co-Coach Xavier Castellano gave her the number since he's a big Los Angeles Lakers fan. Van Den Heever, who started playing basketball at California Elementary, has steadily improved at the point guard position.

After the team won the Santiago tournament, Castellano called her one of the best sophomores in Orange County. She certainly was valuable even last year as a freshman, when Maya averaged 9.2 points per game and earned Newport-Mesa Dream Team honors. She helped Estancia win the outright Orange Coast League title and advance to the Division 3A quarterfinals for the first time in 14 years.

What Van Den Heever's arrival did was allow Estancia senior Celia Duran, last year's Newport-Mesa Player of the Year who is averaging 18 points per game this year, to move from point guard to the wing.

Van Den Heever has continued to grow. Castellano said she played very well over the summer at the prestigious San Diego Classic, where Estancia beat Marina and reached the winner's bracket.

"Maya could score 20 points a night if she wanted to," Castellano said. "She's capable of that, but she's point guard. She realizes how important it is to set us up in our offense, control the tempo. She makes things easier for everybody else."

Van Den Heever did take over once this season, against El Modena at the Ocean View tournament. Duran had the flu, but Van Den Heever scored a career-high 25 points to help Estancia rally for a 73-72 victory.

"We feed off her energy a lot," Castellano said of Van Den Heever, who also is a pest defensively and seemingly always in the passing lanes.

The Eagles' other co-coach, Judd Fryslie, has been working with Van Den Heever on her outside shooting. Typically, she is more likely to drive the ball inside.

"Honestly, I don't really like shooting," Van Den Heever said. "I think I suck at it. But I've been trying to shoot a lot, practice outside. I've been making my threes sometimes. I just don't like making them in the games. I'd [rather] pass it off to Celia or [senior guard Bryanna Vernon]."

After she helped Estancia win the Santiago tournament, Maya and her family went to Las Vegas for New Year's. She said it got a bit crazy. After the clock struck midnight to usher in 2014, Maya said she saw people fighting in front of Caesar's Palace.