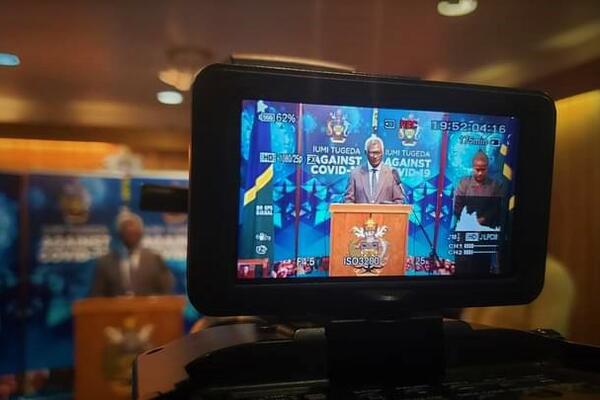 “So when such initiatives of a press conference are made, it will also greatly assist the journalists in how they work in their respective newsrooms. Less time will be spent in chasing relevant government representatives to respond to comments or issues raised by the public”.
Source: File: OPMC
Share
Thursday, 01 October 2020 08:37 AM

The Media Association of Solomon Islands (MASI) wishes to thank the government for the initiative of a weekly press conference.

MASI President, Georgina Kekea says this initiative is timely as the media struggle in its role to curb the spread of misinformation.

“Forbes reported that there are 2.5 quintillion bytes of data created each day. That is a lot of information”, Ms. Kekea says.

She says the challenge in the pace of information sharing is also being felt by MASI. She says MASI thrives on responsible reporting and often encourages and reminds its members to stick to their code of conduct.

“We need to be proactive now in how we do things but responsibly. Most especially at this time of pandemic and crisis, people will certainly be worried. The bridge between relevant stakeholders and the media needs to be strengthened so that timely, factual and credible information is being shared to our people”, Kekea says.

She says MASI is also doing what it can to support its members with the limited resources that they have. She says it has not been easy but with the support they have from other supporting agencies they have been able to carry out sessions for journalists to enhance their knowledge and understanding on the different makeup in both government and non-government machinery.

“So when such initiatives of a press conference are made, it will also greatly assist the journalists in how they work in their respective newsrooms. Less time will be spent in chasing relevant government representatives to respond to comments or issues raised by the public”.

She says journalists work long hours thus such initiative though might not be deemed important, meant a lot to the workers who have pressing deadlines on a daily basis. The MASI President urges its members to make use of the opportunity presented to them to really ask the questions that matter.

“Do thorough research, listen, read and understand the issues better so that you can be able to ask the questions that matter not only for the people but questions that also make government accountable for their actions”, Ms. Kekea says.

This week has been the third conference members of the Oversight Committee have with the media.