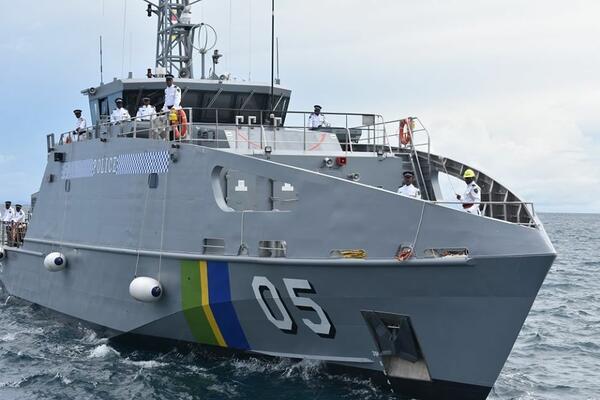 The maritime capability of the Royal Solomon Islands Police Force has been boosted with the commissioning of the new Guardian class patrol boat, 05 GIZO during a ceremony in Honiara yesterday.

Speaking before the commissioning, Acting Commissioner of the RSIPF, Mostyn Mangau thanked the governments of Solomon Islands and Australia for making available the new patrol boat.

“The maritime security partnership between Australia and the Solomon Islands has been in place for almost 40 years with the first patrol boat gifted in the early 1980’s. Our countries share common values and a commitment to regional security.”

“To the Director RSIPF Maritime, the captain and crew of our new Guardian Class Patrol Boat Gizo, you bear a great responsibility for the use and safekeeping of this vessel. I commend your efforts in delivering PB Gizo to our shores on in its maiden voyage. This vessel is the pride of our fleet and will protect our borders and support our neighbours,” says Acting Commissioner Mangau.

The Pacific Patrol boat replacement project is part of the Australian Government’s Pacific Maritime Security Program that aims to enhance practical maritime security cooperation across the South Pacific. The Pacific Patrol Boat Replacement Project broadens and further strengthens the region’s capability to responds to issues such as fisheries protection, trans-national crime, and search and rescue through the provision of patrol boats to Pacific Island nations.

The Pacific Patrol Boat Replacement program comprises 21 vessels for delivery to 12 Pacific Island nations and Timor Leste from late 2018 to 2023. The RSIPV Gizo, the first of the two vessels that Solomon Islands will receive under the Program, is capable of travelling 3,000 nautical miles with a crew of 23.

The two new Guardian class patrol boats will replace the Pacific Patrol Boat RSIPV Lata, which has already been decommissioned, and the RSIPF Auki which is still operating at the moment.