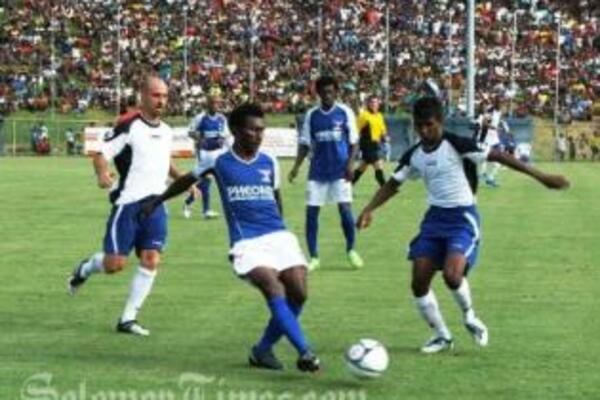 Marish Head Coach, Patrick Miniti, is confident his team will perform and get the result they want.
Source: SIFF Media
Share
Thursday, 11 February 2010 07:02 AM

Marist Head Coach, Patrick Miniti, released the list of players who will be travelling to Fiji for their O-League return match with Fiji champions Lautoka.

With only 2 days remaining before the team travels, Miniti has eased the pressure on his side with the publication of the list of 15 players who made the final cut.

There are notable inclusions and omissions in the list, which will serve for good debate amongst supporters of the club.

One surprise inclusion is Michael Sira. The young player only joined Marist a couple of weeks ago but Miniti has expressed good faith in him.

"Sira is a very confident player and displays the skill level of more senior players," Miniti said. "The biggest advantage of the youngster is that he can play on the left as well as on the right, basically he is an utility player so he can offer a lot."

Sira will take over the outside left-back position occupied by Charlie Taniro who is still nursing an injury.

George Lui, Marist's most prominent recruit, will shoulder a huge responsibility in the midfield section. Miniti has placed him as his playmaker will be crucial in creating and supporting Marist's attacking moves. Lui's transfer to Marist has certainly boosted the level of confidence of the players.

The most prominent omissions are Martin Ruhasia and David Houpere who have played key roles in the Marist backline for some years. Both players have received government scholarships to study overseas and the club has decided to release them as they prepare for their travel. Miniti offered his gratitude to the players for their service to Marist and wished them the best in their education. It is almost certain that the duo will not feature again for Marist for the rest of the season.

With only 2 days left to go, Miniti said that he is confident that his team will perform and get the result they want against Lautoka. The team has spent the better part of the last month training and the players are looking sharp especially in defence which has been a source of concern in their last O-League matches.

"You can never be satisfied with your preparation but I feel that we have achieved a lot," Miniti said.

Miniti was generous enough to give away some details of their game plan in his interview with the SIFF Media Office.

"Our approach will be to take the game to Lautoka and be aggressive with our pursuit for goals," Miniti said. "We definitely will be attacking Lautoka, we have nothing to lose and all to win."

Their game with Lautoka is scheduled for Sunday February 14 and will be held at Churchill Park in Lautoka. Marist will leave for Fiji tomorrow.

Marist will travel to Vanuatu to play Tafea after their meeting with Lautoka. Their final pool match will be played at home against Hekari of Papua New Guinea who embarked on a recruitment frenzy this month.

Marist need to win their final 3 matches to have any chance, albeit a mathematical one, of going through to the O-League finals. At the moment Tafea are the favourites and Lautoka follow.