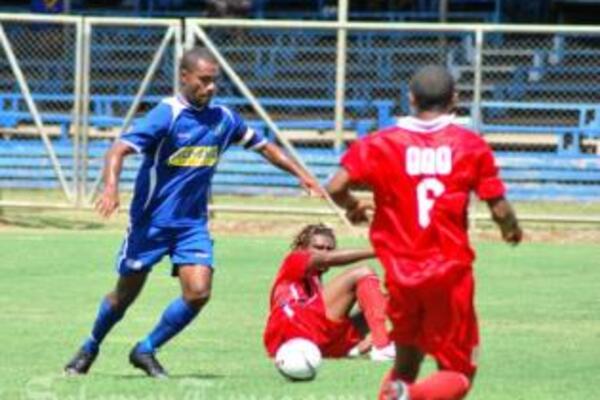 Marist are now completely out of contention for the finals and coach Patrick Miniti says that they will try to win their last 2 matches for the sake of their fans.
Source: Photo Supplied
Share
Monday, 15 February 2010 09:34 AM

Marist has suffered yet another defeat in the O-League competition going down to Lautoka by 3 - 0 in Fiji on Saturday afternoon.

This is their fourth straight defeat in the season and fans are left with no solace as the national champions failed to regain some pride after a disappointing start to their O-League campaign in October 2009.

It was not going to be easy for Marist who were underdogs going into the match against Lautoka but the result itself was surprising for fans who had hoped for a positive result and thought that their team had overcome their demons.

The recruitment of additional players during the season break did little to help Marist who was up against a Lautoka side high on confidence after winning the Pilay Garments Champion and lifting the Champion series against Ba by 7 - 0 earlier this year.

Osea Vakatalasau opened for the home side in the 8th minute giving Lautoka an early command in the game. Throughout the match Vakatalasau was Lautoka's main man giving the Marist defence a hard time.

Late signing, Salesh Kumar, played a key role in the back line, occupying the sweeper's position, controlling the defence and supporting the midsection of Lautoka's attack.

Lautoka then increased the pressure on Marist with several good combination plays that left the Solomon Islands side back-peddling. However, despite their good efforts in the first half Vakatalasau's goal remained the difference when half-time came.

In the second half Lautoka were quick to place their stamp on the game and went up 2 - 0 ahead courtesy of Alvin Avinesh's strike in the 48th minute. Avinesh's goal set the pace for the second and Lautoka continued to dominate the attacking part of the game.

Jone Vonu Junior then buried the match for Lautoka with his strike in the 73rd minute. By this stage of the match it was too big an ask for Marist to salvage anything from it. The Lautokan's had already achieved their objectives and sat back to defend their lead in the last 17 minutes.

The victory puts Lautoka on top of the Pool B table with a total of 9 points from 4 matches. Both Tafea and Hekari United have 7 points each but the latter is on second spot by a slightly better goal difference.

Marist are now completely out of contention for the finals and coach Patrick Miniti says that they will try to win their last 2 matches for the sake of their fans. They will play away against Tafea in Vanuatu on March 6. Their final match will be against Hekari United in Honiara on March 28.

Hekari United beat Tafea by 4 - 0 in the other Pool B match which was held on Saturday.