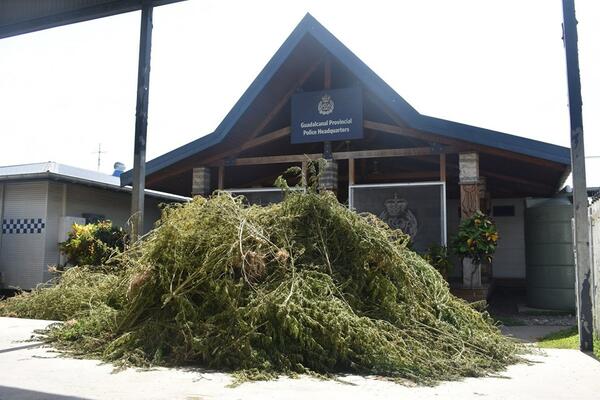 Officers of the Royal Solomon Islands Police Force (RSIPF) in Guadalcanal Province have arrested a man in his 20s after uprooting several thousand marijuana plants in the Mberande area of East Guadalcanal on 24 June 2019.

“The uprooted marijuana plants are believed to be valued at between $500,000.00 and $1 million if sold in the local market,” says PCIO Nevol.

He explains: “By virtue of section 7 of the Dangerous Drugs Act, no person shall cultivate in Solomon Islands the opium poppy or Indian hemp or coca leaf plant. That growing opium poppy, Indian hemp or coca leaf whether for private use or otherwise; or found in possession of or selling, or who shall have given or sold, to any person any substance to which this Part of this Act applies, shall be guilty of an offence against this Act.”

Inspector Nevol appeals to the good people of Guadalcanal Province to report to police if they know of any one cultivating such dangerous plants, possessing, using or selling it. Let us all work together to get rid of such dangerous drugs from our communities.