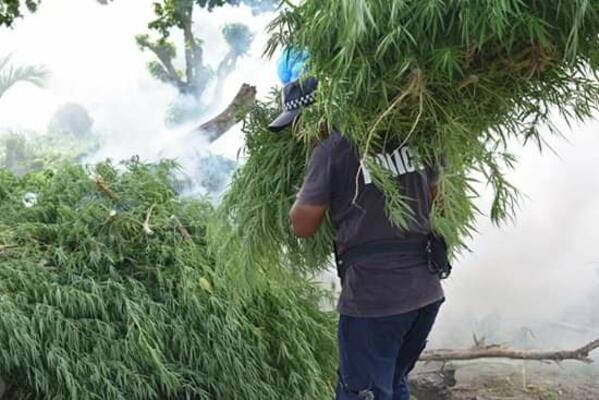 A team of officers from the RSIPF’s Police Response Team (PRT), Provincial Support Unit (PSU) and the Central Response Unit (CRU) uprooted more than 5,500 marijuana plants from various locations in the Mbarande area of North East Guadalcanal on 21 and 22 October 2019. No suspect has been arrested so far but investigations are continuing.

The Royal Solomon Islands Police Force (RSIPF) calls on members of the communities in North East Guadalcanal including village chiefs, church leaders, women and youth leaders to assist police identify those responsible for planting gardens of marijuana in the Mbarande area.

Team Leader for the two-day Operation, Sergeant (Sgt) Loginor Waiparo says, “We have uprooted the marijuana plants at different locations in the Mbarande area. Three gardens of marijuana were located on the other side of the Mbarande Bridge and one big garden further down, about one kilometre drive from Koivo Village.”

Sgt Waiparo says, “It took us about eight hours to uproot the gardens of marijuana. We had to destroy the marijuana plants in the garden close to Koivo Village as it was too far to carry the plants to the vehicle, a distance of one and half kilometres from the garden. Not only that, but it is safe since the village is far from the garden so we decided to burn them at the location.”

“We managed to transport four truckloads of marijuana uprooted from the location close to the road access and will be safely at Hells Point East of Honiara,” Sgt Waiparo explains.

“The operation was successful because of the assistance from members of the communities around the location of the marijuana gardens. I really appreciate the support of these communities. Despite no arrests being made, we were able to uproot the marijuana plants. Chiefs and community elders were very pleased with the operation and they appeal to police to do more raids to get rid of the marijuana being planted in the Guadalcanal Plains.”

“Police need the assistance of members of the communities to get rid of this illegal substance which continues to cause a lot of social problems for our people. I appeal to anyone who has information of the whereabouts of any marijuana garden in the Guadalcanal Plains or any other provinces to report it to the police and we will do all we can to get rid of the illegal drug to make our communities safe,” Sergeant Waiparo emphasises.

He commended the officers of the PRT, PSU and CRU involved in the joint operation for a job well done.