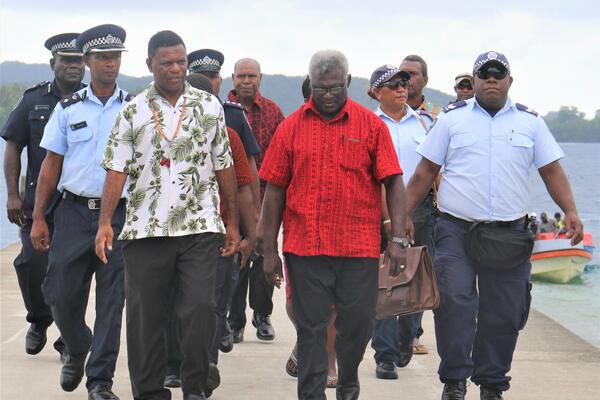 Prime Minister Sogavare touched down at Marau airstrip after 9am to an anxious crowd, some their first time to see and meet their Prime Minister in person.

A guard of honor was also mounted by the Royal Solomon Islands Police Force upon his arrival.

The Prime Minister was hoisted on a wooden chair by traditionally dressed strong men to a waiting canoe, where he was transported from the airstrip to Marau station where the Guadalcanal Provincial Executive in their rich red island outfit warmly welcomed him to rural Guadalcanal.

The Prime Minister also visited the Marau Mini Hospital, where he thanked public servants serving as doctors and nurses serving in the mini hospital for their services to the Government and people.

He further encouraged them to remain faithful in their duties.

Projects visited today by the Prime Minister today included the new Marau market, which is still under construction and road infrastructure facility.

Prime Minister Sogavare will host an official dinner this evening at Tavanipupu Resort.

The core of the celebration will be today where the Prime Minister is expected to address the Provincial Government and People of Guadalcanal on the Theme: Inclusiveness and Sustainability: Harnessing Opportunities through Township, Culture and Tourism Development.