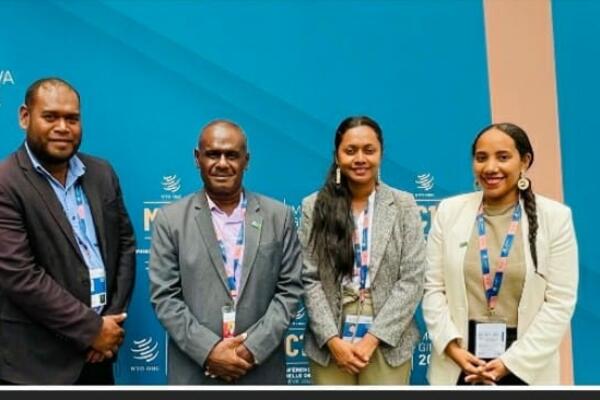 Minister of Foreign Affairs and External Trade Hon. Jeremiah Manele concluded his participation at the World Trade Organization (WTO) Twelfth Ministerial Conference (MC12) after the conference was extended by an additional day, in Geneva, Switzerland.

The MC12 concluded with key trade outcomes including, a progressive agreement on Fisheries Subsidies, WTO Reforms, WTO Response to the COVID-19 Pandemic, Food Security and Agriculture, and on E-Commerce.

Foreign Minister Manele also held several bilateral meetings and engagements with key development partners in the margins of the MC12.

The Foreign Minister held a bilateral meeting with Senator, Hon. Kamina Johnson Smith, Minister of Foreign Affairs and Foreign Trade of Jamaica, who presented her candidacy for the post of Secretary-General of the Commonwealth. The Foreign Ministers also engaged in discussions on increasing Small Islands Developing States (SIDS) engagement in the multilateral fora.

Foreign Minister Manele also held a bilateral with New Zealand’s Minister of Trade and Export Growth, Hon. Damien O’Connor, to discuss outcomes of the MC12 and priorities on fisheries subsidies.

A roundtable discussion was held between the Commonwealth Secretary General, The Rt Hon Patricia Scotland QC, with Pacific Trade Ministers and representatives to provide an update on the Commonwealth Secretariat’s trade programme and plans post-MC12, as well as discussions on potential capacity building, technical and research support needs on trade policy at the national, regional, and multilateral level.

The date of the next WTO Thirteenth Ministerial Conference (MC13) is scheduled for 2023, whilst consultations are underway to finalize the venue.

The Minister will continue his diplomatic engagements to lead the Solomon Islands delegation at the Commonwealth Heads of Government Meeting (CHOGM) in Kigali, Rwanda, where he will be joined by Ambassador Moses Mose, Ambassador of Solomon Islands in Brussels and other senior government officials from the Ministry of Foreign Affairs and External Trade.