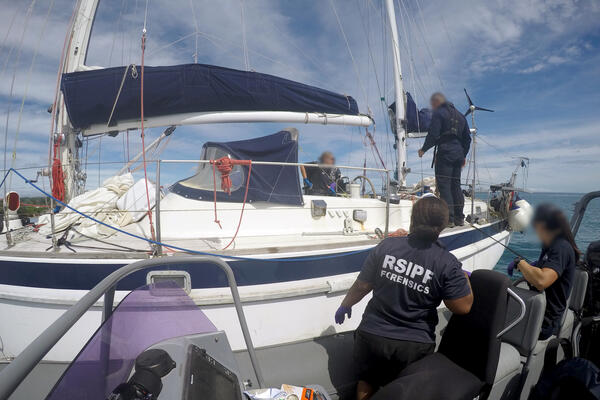 The vessel mooring in Honiara waters contained 501 kilograms of cocaine, with an estimated street value between AUD$125 million and $250 million.
Source: afp.gov.au
Share
Thursday, 20 May 2021 10:10 AM

A 43-year-old man has been sentenced to 14 years and five months’ jail for his involvement in planning to import over 500 kilograms of cocaine into Australia via the Solomon Islands in 2018.

A Belgian-registered, double-masted yacht Vieux Malin was searched by the RSIPF, with assistance from AFP, at a mooring outside the Honiara marina.

A large quantity of cocaine was found concealed within the vessel and seized.

The cocaine was loaded onto the vessel in South America and was destined to be imported into Australia.

The concealment of cocaine was complex and professionally constructed.

The vessel contained 501 kilograms of cocaine, with an estimated street value between AUD$125 million and $250 million.

Law enforcement in Australia coordinated activity in Sydney on 27 September 2018, to coincide with the search of the yacht in Honiara.

Two men were arrested and four search warrants conducted in the suburbs of Wahroonga, Bonnyrigg Heights, Dolls Point and Caringbah.

On 12 December 2019 a 41-year-old Bonnyrigg Heights man - who was charged with knowingly dealing in money or other property which is an instrument of crime, valued at greater than $50,000 -was sentenced in Downing Centre District Court to two years’ imprisonment to be served by the way of an Intensive Correction Order and 500 hours of community service.

On 7 May 2021 a 43-year-old Wahroonga man who was a key facilitator in organising the importation of the drugs, was sentenced for conspiracy to import a commercial quantity of border controlled drugs and knowingly dealing in money or other property which is an instrument of crime.

He was sentenced in Downing Centre Court to 14 years and five months’ imprisonment with a non-parole period of nine years for his involvement in the conspiracy to import the cocaine into Australia. He was also sentenced to five years’ imprisonment with a non-parole period of three years for his involvement in knowingly dealing in money or other property which is an instrument of crime, valued at greater than $50,000.

AFP Detective Superintendent Ben McQuillan said strong partnerships with international law enforcement was vital to the success of the investigation.

“This was an unprecedented investigation between Australian and Solomon Islands authorities and shows what we can achieve when we work together to slam the brakes on large-scale drug importation by organised crime,” Detective Superintendent McQuillan said.

“The AFP will continue to work tirelessly to outsmart organised crime groups and to halt the importation of illicit drugs into the Australian community.”

“ABF Officers are not only focussed on stopping harmful drugs at the Australian border, they’re working with our partners overseas to stop organised crime before it reaches our shores,” Acting Commander Low said.

“This operation required a multi-layered approach, which involved disruptions offshore, detections at the border and targeting the facilitators here in Australia.”