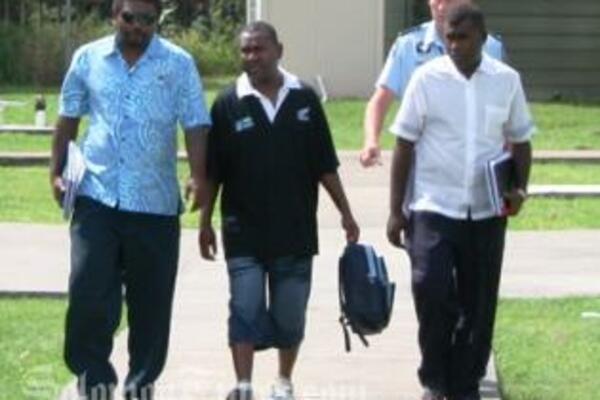 Philip Bobongi (centre) is escorted by officers from the RSIPF's Corruption Squad to appear before Honiara Magistrate's Court for alleged money laundering offences.
Source: Photo Supplied
Share
Thursday, 28 May 2009 09:54 AM

A West Guadalcanal man was today refused bail and remanded in custody for another fortnight after appearing in Honiara Magistrate's Court over money laundering offences.

Philip Bobongi, aged in his 40s, from West Guadalcanal, now awaits trial on charges of Larceny as a Servant, False Pretences and Money Laundering.

The Royal Solomon Islands Police Force's Corruption Squad investigators, together with the Financial Intelligence Unit, arrested Mr Bobongi two weeks ago on charges related to the operation of a local money laundering scheme.

Police seized SBD$200,000 cash of bundled notes meant to be withdrawn from circulation, from his Mbokona home.

It is alleged that he had also taken old and reusable Solomon Islands Bank currency from Central Bank of the Solomon Islands, depositing it into his account and that of his wife since 2006.

The court today supported the prosecutor's recommendation not to allow bail due to the significant amount of money involved, the repeat offences committed over several years and the risk of flight.

Police also made a successful application through the Director of Public Prosecution to the court, to seize several assets including two vehicles. Previous court orders froze access to Bobongi family bank accounts.

The case is the result of the first major money laundering investigation launched by the Royal Solomon Islands Police. Investigators with the RSIPF's Corruption Squad worked closely with the Financial Investigation Unit to establish evidence for prosecution purposes.

Mr Bobongi is due to reappear for Mention Hearing in Honiara Magistrate's Court on 10 June.