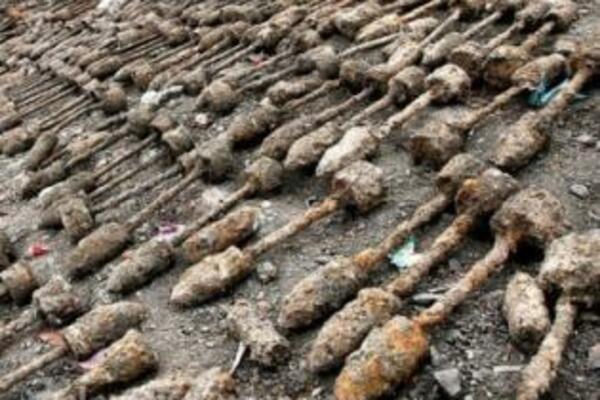 Mortars, such as those pictured above, could still be found in the jungles of Guadalcanal.
Source: Photo Supplied
Share
Tuesday, 21 April 2009 08:42 AM

Police arrested a man over the weekend at the Central Magistrate court bus stop in Honiara for carrying around an old World War II Japanese mortar.

The man, who was spotted by a Police patrol around 2:20 pm standing at the Magistrate court bus stop with an old World War II ordinance in his possession, was seemingly oblivious of the dangers it posed.

He was immediately apprehended by the Police patrol officers who than took him to the Central Police station while the mortar was taken down to hells point for safe disposal.

One of the officers in the patrol stated that this is not the first of such incident, stating that many search for these old World War II relics hoping they could sell them. "Members of the public are warned against carrying around such mortar bomb, despite its historical interest, as they are still highly active and will explode if exposed to fire or heat."

During World War II the Guadalcanal Campaign, which was also known as the Battle of Guadalcanal, was fought between August 7, 1942 and February 9, 1943 on and around the island of Guadalcanal in the Solomon Islands. Fiercely contested on the ground, at sea, and in the air, the campaign was the first major offensive launched by Allied forces against the Empire of Japan.

Mortars, tankers and other heavy artillery's and weapons could still easily be found in the jungles of Guadalcanal.