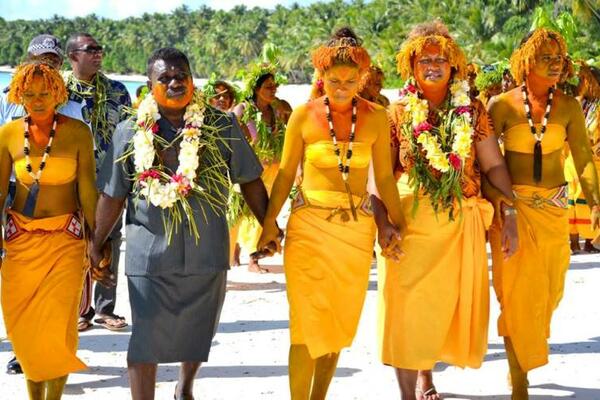 The Prime Minister and his delegation spent last weekend with the people of Lord Howe and Sikaiana.
Source: Philiip Lilomo
Share
Wednesday, 03 July 2013 09:11 AM

People of Malaita Outer Islands (MOI)in Solomon Islands says it is high time for them to move into resettlement before sea level rise could become a huge threat for them.

This was highlighted during the three days visit of the Prime Minister Gordon Darcy Lilo to the low-lying atolls over the weekend.

The Prime Minister spent last Friday to Sunday with the people of Lord Howe and Sikaiana.

Spokesperson for Pelau community in Lord Howe, Chris Keungi highlighted that the issue of resettlement was raised during the political tenure of their former politician late Paul Keyumi in 1980’s but nothing has been done.

He said the issue of sea level rise is real and is happening on their islands as well some parts of the country which needs to be addressed now.

“Some of the contributed factors why we really need resettlement are; over population, poor soil fertility and scarcity of land mass.

“We believe it is high time to move into resettlement,” Mr Keungi said.

Similar sentiments were also raised at Luaniua community also on Lord Howe on the issue of resettlement.

Samuel Kenini of Luaniua said climate change is a big threat to them.

He said they have been experiencing land erosion, highest and lowest tide, extreme weather conditions, garden crops dying due to salt water intrusion and many more.

He said the other contributing factors are land become scarce while population is skyrocketing.

“This has forced some of us moving to settle on other parts of the islands while others move to the small island of Luaniua,” Kenini added.

He suggested that if the government is planning to resettle in the bigger islands they suggest Isabel province as their first choice.

In response deputy premier of Malaita province Alick Mae’aba said two sites have been identified for the resettlement program.

He said one of the sites is Airahu in Central Kwara’ae and Afio in South Malaita.

Maeaba said a taskforce committee has been set up to look into the progress and development of the resettlement program.

He said the committee will consult with Malaita Outer Islands and the provincial government to come up with best options for the resettlement.

Maeaba said the idea is for each family to have a plot of land which they will take full ownership of it.

Prime Minister Gordon Darcy Lilo said the issues that are being raised by the Malaita Outer Islands community are real which calls for re-engagement and commitment by the national government, Malaita provincial government and donor partners to address it.

He said he will take on board all the concerns and bring it to the caucus for discussion.