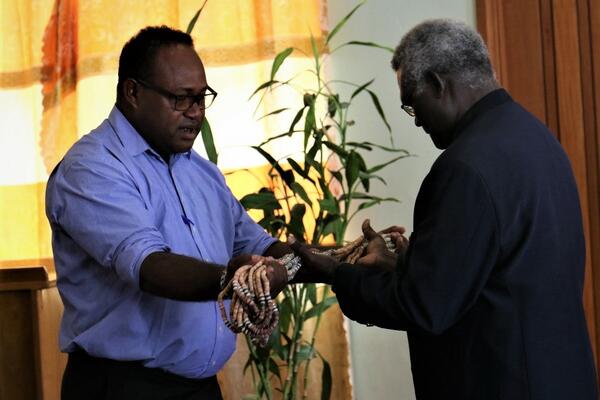 “Such action is strongly condemned as it does not reflect our traditional and Christian values of which our families, communities and this country strongly hold,” Maelanga said.
Source: Supplied
Share
Friday, 08 May 2020 10:22 AM

Malaitan MPs from the Democratic Coalition Government for Advancement (DCGA) today, handed ‘Tafuliaes’ to the Prime Minister, his family and to the Government MPs from Choiseul and other constituencies in the Western Solomon region.

This is in relation to the recent video that was shared via Facebook containing offensive language targeting the Prime Minister and his family.

Speaking on behalf of the Malaita MPs, Member of Parliament for East Malaita and Deputy Prime Minister, Hon. Manasseh Maelanga stated that the purpose of the ceremony was to express to the Prime Minister, his family and other Government MPs from Choiseul and Western regional constituencies, their utmost respect and continuous support to the leader of the DCGA and colleague MPs.

He said that as Malaitan MPs serving under the DCGA “we also wished to express our full commitment to continue to serve under the DCGA t0 move this country forward.”

He further stated that the occasion is also to express their deepest concern for the unfortunate circumstance regarding the publication and dissemination of the video.

Hon. Maelanga also took the opportunity to speak out against the use of social media to show disrespect and abuse to other fellow citizens.

“Such action is strongly condemned as it does not reflect our traditional and Christian values of which our families, communities and this country strongly hold,” he said.

Hon. Sogavare stated that “Solomon Islands is a country that has its foundation on the pillars of our traditional values, the church and good governance, and the occasion depicts our stronghold to these pillars.”

The Prime Minister also thanked his colleague MPs for the gesture shown to him and his family.

Minister for Public Service and MP for North Vella La Vela Hon. Frederick Koloqeto, Minister for Home Affairs and MP for Shortland Islands, Hon. Chris Laore and Minister for Finance and Treasury and MP for South Choiseul Hon. Harry Kuma who also received a ‘Tafuliae’ expressed their gratitude for the gesture expressed by their colleagues.

A majority of MPs from Malaita constituencies are part of the DCGA government.

Chairman of Government Caucus Hon. Namson Tran and his deputy Hon. Jackson Fiulaua were also present to witness the ceremony.

The DCGA is committed to the delivery of ongoing and prospective policy priorities in the interests of peace, national stability, economic advancement and political unity.