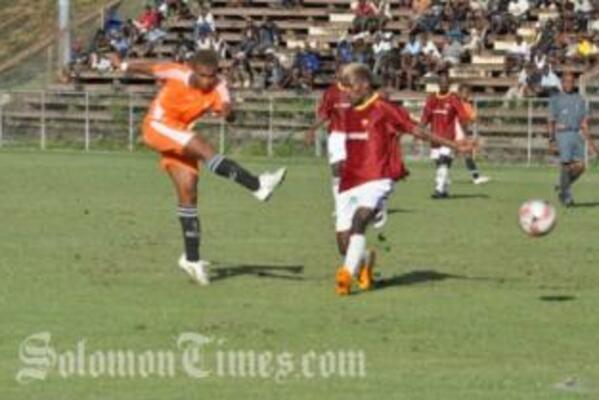 Spectators and match officials alike were left confused as doubt surrounded whether Makuru will turn up for their match with Gizo United scheduled for 4:00pm last Saturday.

Makuru is owned and managed by Seventh Day Adventists and earlier in the week stated in the media that they would not play the match based on religious convictions.

However, 30 minutes before the game started Makuru players arrived, adamant that they were going to play amidst fears that the club may be disqualified if they failed to play their match.

After sorting out the confusion the match proceeded with Makuru fielding mostly young players as the senior players did not turn up. Gizo United were hoping for free points and seemed somewhat disappointed walking into the field for the match.

It took Makuru only 2 minutes to score. Dennis Ifunaoa raced forward to pick up a through pass way behind the Gizo United defenders to beat the goalkeeper with a low shot.

Makuru continued with their attack after Ifunaoa's goal but often their players were caught by Gizo United's offside trap.

Coleman Makau, however, broke through in the 13th minute to give Makuru a 2 - 0 buffer. Makau repeated his effort 10 minutes later extending Makuru's lead to 3 - 0.

Gizo United immediately replied after Makuru's third goal. Willie Riqeo received a flat pass from Cornelly Rata which he struck beautifully for it to curve down behind Makuru keeper Leon Lekezoto into the back of the net.

Just before halftime Makuru scored again to go out 4 - 1 in front with Commins Menapi's easy tap in from a side pass.

In the second half the match was more evenly played and Makuru had to rely on its strong defense lines to keep the Gizo United forwards at bay. Despite successfully bringing the ball into the Makuru 18 yard box Gizo United's shots were either blocked by defenders or saved by the goalkeeper.

In the end Makuru held their lines to maintain the score line and win the game by 4-1. Makuru now top Group C with 9 points and Gizo United are in second place with 2 points.

The final Group C match, between, South Central Gold and Solomon Warriors, will be played on Tuesday 25th May, 2010 at 2:00pm. Both teams have 1 point each and this game will decide who takes the second Group C spot for the quarter finals of the Our Telekom National Club Championship.