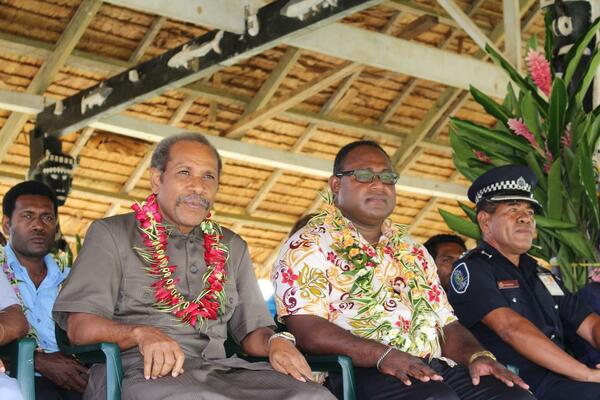 Solomon Islands Makira-Ulawa Province is making positive progress in achieving some of its visions and development programs in the 2013-2014 periods.

In his address during celebrations marking the Province’s 31st Second Appointed day in Kirakira on Monday, Premier Thomas Weape highlighted the achievements and challenges that the province has experience during the period.

Among the major achievements made recently by the MUP is the passing of the Performance Assessment of the Provincial Capacity Development Fund (PCDF) in 2013 which has qualified the province to access the PCDF in 2014.

The PCDF is a financial assistance scheme administered by the Ministry of Provincial Government targeted at improving and developing peoples’ livelihoods through empowering and strengthening provincial governance systems.

“I firmly believe that we will continue to improve our governance system as we strive to perfect it in order that the Government and other donors place their total confidence and trust on us. Much more important, is to ensure that our services reaches and touches the lives of our rural populace in our province,” Premier Weape said.

A total of 9 projects including assistance towards education, health, fisheries, agriculture and water supply in 9 wards in the province have been completed and handed over to recipient communities last year.

The other achievement is the MUP’s successful negotiations with the University of the South Pacific last year to establish a Center in Kirakira. This means access to tertiary education is now available in Makira which results in the training of 150 In-service Teachers including Police Constables during the June Break this year.

“I believe this is one of the best development and achievement we made as we strive to have literate and educated Makira Ulawa citizens,” Premier Weape said.

Besides the achievements, the Provincial Government is working towards completing its 2014-2015 development programs in other parts of the province  including building of infrastructure for schools, clinics, fisheries, water supply, roads and a market center in Kirakira.

Premier Weape also highlighted that the achieving some of their goals was not easy as the province continues to face some underlying challenges, some of which are becoming more complex in nature.

One of the immediate challenges that his executive is working hard to address is the urgent need to solve the current water crisis and rubbish disposal in Kirakira.
Premier Weape urges all resource and land owners to come forward and help the provincial government find solutions to address these issues.

The province is also facing weak internal revenue collection over the years due to non-compliance by businesses to pay licenses, most especially, some logging companies operating in Makira.

Premier Weape warned that dishonest business houses can escape from the province but they cannot escape the law of the Solomon Islands.

Other challenges that are outstanding include the lack of qualified human resources to drive the province forward, inadequate housing and a proper wharf for the main seaport at Kirakira which Premier Weape has called on the National Government to reconsider and rebuild to enhance trade and commercial activities in the province.

In his remarks, Chief Guest and Acting Prime Minister Manasseh Maelanga congratulated the Province for its impressive achievements and encouraged the Provincial executive and resources owners to work as a team for the common good of the province.

He said any provincial government need to work as a team to avoid political fragmentation which can hinder progress.

“Let us not forget that we have a duty to ensure that we have a provincial government that is more responsible, well-governed, transparent and accountable because if we do not; we will lose the interest and more importantly the confidence that our people have in us as well as towards the developments of this province. And that is why we need a stable government to achieve our goals to benefit our people,” Mr Maelanga said.

Mr Maelanga also expressed confidence in the leadership of the Provincial Government which came a long way in serving its people sometimes in isolation and hardships.

“There have been times of great challenges that the Province as a government and people have faced and overcame. With the dynamic and ever changing global economy, we must brace ourselves for new challenges that lie ahead of us. It is therefore important that we unite as a people to be able to summon the strength to conquer these challenges. I strongly believe that Makira-Ulawa Province can be better prepared if our people unite and live in peace,” Mr Maelanga said.

Celebrations on Monday were marked with speeches, parades, feasting and a display of traditional food preparation in Makira.