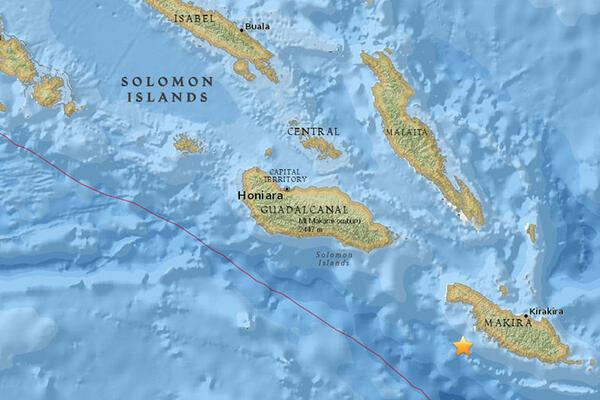 An earthquake with magnitude 7.8 occurred 68km WSW of Kirakira, Solomon Islands at 4.18am local time.

A tsunami warning has since been issued for the Solomon Islands, Vanuatu, Papua New Guinea, and Nauru. The USGS initially reported the quake as 8.0, but later downgraded it to 7.8.

"Hazardous tsunami waves from this earthquake are possible within the next three hours along some coasts of Solomon Islands, Vanuatu, Papua New Guinea, Nauru, New Caledonia, Tuvalu and Kosrae," stated the warning issued by the Pacific Tsunami Warning Centre.

The centre called on the government agencies responsible for dealing with emergency situations to “take action to inform and instruct any coastal populations at risk in accordance with their own evaluation.”

The epicentre of the quake was registered at a depth of 48.7km, according to USGS.

There are no immediate reports of damages to homes in the capital, Honiara. Tsunami warnings with ETA just hours after the quake struck was issued by the USGS for Kirakira, Auki, Honiara and parts of the Central and Isabel Provinces, but has since passed.

No evacuation is planned for the national referral hospital, sources say, which is located on the coast of Honiara.

Preliminary reports from Kirakira states that while the quake was perhaps the biggest they have felt in recent times, there are no damages to homes and no immediate reports of casualties.