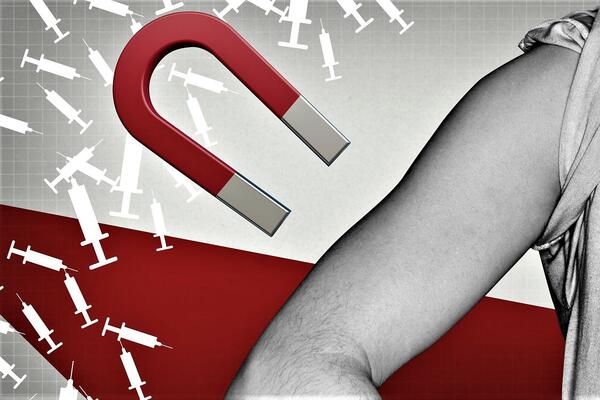 Such claims are not new, several social media users overseas, often tied to antivax groups online, have shared videos that appear to show magnets sticking to people’s arms where they say they were injected.
Source: BBC
By Samson Sade
Share
Tuesday, 16 November 2021 08:50 AM

The woman who claimed that the COVID-19 vaccine contains magnetic substance is now under active investigation. This was revealed by the Attorney General John Muria Jr. during the 14 November talkback show over the national broadcaster, SIBC.

The story was carried last week by the Solomon Star newspaper with a photo showing a woman with her mobile phone purported to stick to her arm after the syringe was removed.

The woman claimed that her mobile phone latched onto her arm by the supposed magnetic substance contained in the vaccine.

Such claims are not new, several social media users overseas, often tied to antivax groups online, have shared videos that appear to show magnets sticking to people’s arms where they say they were injected.

But medical experts say such claim as utter nonsense.

Al Edwards, an associate professor in biomedical technology at the University of Reading in England, told Newsweek that because vaccine’s core ingredients are some of the same things that are already in the human body.

“There is simply no way that injecting a tiny fragment of this material could make it respond to a magnet.

"Most food is made of similar molecules, and eating food doesn’t make people magnetic," he said.

The Permanent Secretary at the Ministry of Health, Pauline McNeill, said that the Ministry has already deployed a community health team from Kilufi on Malaita to verify the story.

“The fact is that the story is not true,” she said.

She further calls on the media to be responsible in their reporting by diligently verifying their stories and information before publishing them.

The PS adds that such unverified and unsubstantiated stories unduly stir up unnecessary hype and fear amongst the people.

“Not only that, it also creates unnecessary costs because the ministry is duty bound to send a team to the community to assess and verify the truth behind the magnetic claim including psychiatric test of those concern at the Kilufi Hospital,” she said.

MacNeil mentions that assessment of the case of the magnetic woman is still ongoing.