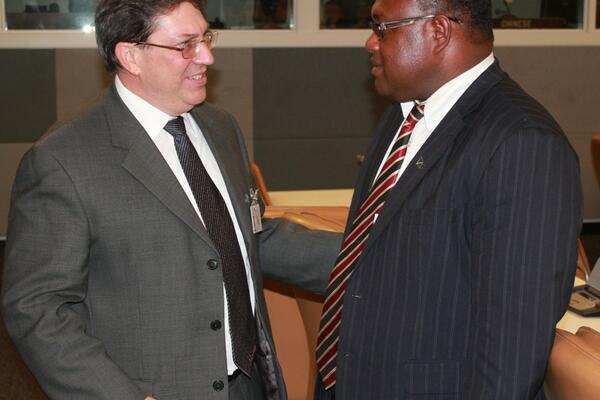 Deputy Prime Minister and Head of delegation to the 68th UN General Assembly, Manasseh Maelanga has conveyed Solomon Islands gratitude to the Government of Cuba for its vision and willingness to assist the country to train its medical doctors.

Mr Maelanga conveyed his message during a special meeting of Pacific Islands States with Cuba’s Foreign Minister Bruno Rodriguez Parrilla at the UN Headquarters in New York on Wednesday.

He said Solomon Islands is hoping to improve its health and medical services once the more than 100 medical students currently studying in Cuba return to the country.

He also said the establishment of the Solomon Islands Mission in Havana early this year will further enhance cooperation between the two countries to explore opportunities that will provide mutual benefits for the two countries.

Cuba is opening medical training opportunities for Pacific Island countries with the aim to share its experience in the field of health which is ranked amongst the top health sectors in the world.

In response, Minister Bruno Rodriguez Parrilla thanked the vision of the Solomon Islands Government as the first Pacific Island Nation to open a mission in Havana.

He said Solomon Islands and Cuba share a lot of features and common interests.

He added that the two countries are tropical Island nations which are under threat of the risks of climate change, further stating that “Cuba will always stand side by side with its Pacific brothers to urge the international community, particularly, developed nations to do more to reduce the impact climate change.”

The Solomon Islands Mission in Havana is expected to be officially opened later this year.