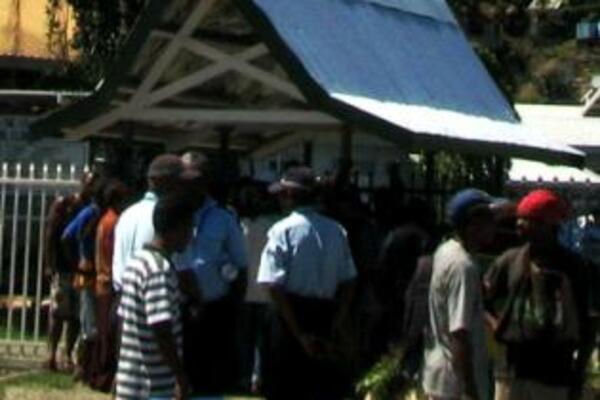 A crowd gathers outside the High Court awaiting the outcome of Mr Lusibaea's case.
Source: STO
Share
Thursday, 25 November 2010 08:19 AM

North Malaita MP and Fisheries Minister, Jimmy Lusibaea, will be sentenced next Tuesday.

Justice David Cameron adjourned sentencing to the 30th of November following a daylong hearing on submissions from the Defense and Crown counsels.

Lusibaea will be sentenced on one count of unlawful wounding of another person and one count of assaulting a police officer in the execution of his duties.

The charges relate to an incident on the 1st September 2000 when Mr Lusibaea shot an already unconscious Robert Solo, once in both knees, and then assaulted Police Officer Sam Manakeha at the National Referral Hospital.

Additional criminal charges of intent to cause grievous bodily harm, discharging a firearm in a public place and possession of a firearm without a license had been withdrawn following the MP's guilty plea.

Mr Lusibaea's lawyer, Robert Cavanaugh, submitted that a sentence less than six months be imposed along with a lengthy period of bond.

In mitigation Mr Cavanaugh said the offences had occurred more than "ten years ago at the height of the ethnic tension and since then there have been efforts made to bring those communities together of which Lusibaea has contributed a lot."

He told the Court Mr Lusibaea is remorseful for his previous actions and since then has been a fully productive member of the community.

They all gave references to Lusibaea's personality, history and good work.

Mathew Coates, from the Crown, stated in his submission that a consecutive sentence should be given to Mr Lusibaea.

He said that considering the seriousness of both offences and given that a firearm was used he would "not be in favor of a sentence that ranges for less than six months."

He said Mr Lusibaea's action during the incident showed that it was a "deliberate vicious act of retribution."

Lusibaea is currently in police custody awaiting judgment next Tuesday.