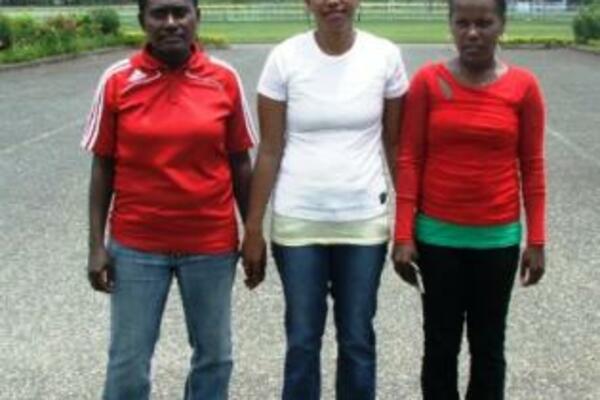 The young referees hope that their trip to the OFC U-20 Women's Championship will help to build the profile of women referees in Solomon Islands and attract more young women to take up refereeing.
Source: Photo Supplied
Share
Wednesday, 30 September 2009 09:55 AM

For Naqarita Jimmy this is the first time for her to travel internationally as a referee and she said that she is determined to make her mark. "It is my aim to become a FIFA badge holder and I see this as an important step to getting there," Naqarita said in an interview at the Henderson International Airport before departing. "I am determined to pass the fitness test so that I can start officiating in an international tournament."

Jovita, who already has one FIFA World Cup tournament in her portfolio, said that this will be an opportunity for her to expand her experience and profile at the international level. "My eyes are on the 2011 FIFA Women's World Cup," she said. "If I prove myself here then maybe I can be considered for the women's World Cup and that will be a dream come true."

The young referees hope that their trip to the OFC U-20 Women's Championship will help to build the profile of women referees in Solomon Islands and attract more young women to take up refereeing.

The OFC U-20 Women's Championship will kick off on October 5th and end on October 9th. The trio will reside in the OFC Football Academy complex in Auckland. They are expected back in the country on 12th October.