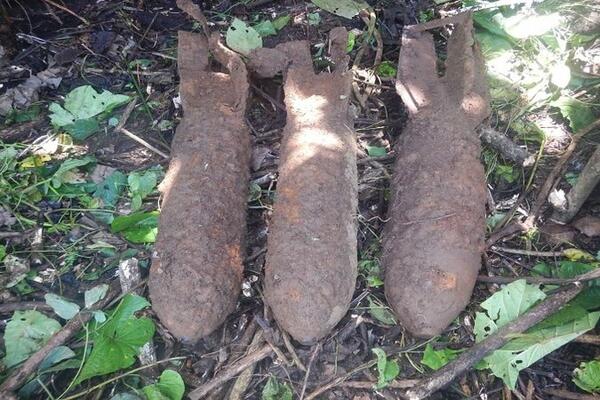 Unexploded ordinances are often discovered in and around various parts of the country. THe bove are unexploded Japanese bombs at Ringi, Kolombangara, Western Province.
Source: radionz.co.nz
Share
Wednesday, 20 February 2019 07:05 AM

DC Matanga adds: “The training will also improve the technical knowledge and skills of the EOD operators to continue address the high demand on them with the presence of UXOs in communities and islands throughout Solomon Islands.”

She says, “The knowledge and skills acquired will also be useful in the light of a proposed EOD Regional School at Hells Point.”

“I would like to thank the advisors who supported the EOD team this far and thank my EOD officers for their commitment to your duties. I also like to thank the US Ambassador to Papua New Guinea, Solomon Islands and Vanuatu, Ambassador Elizabeth Ebert Gray for attending this graduation ceremony,” says DC Matanga.

Officer In-Charge of EOD and course participant, Inspector Clifford Tunuki says, “The one-year training program is a joint effort between the Australian Department of Defense and United States (US) Department of State (DoS). The US Department of State sub-contracted Golden West Humanitarian Foundation (a non-profitable organization) for a full time based advisor with the RSIPF EOD team to manage the program and also serve as the trainer.”

EOD officers also presented gifts to show their appreciation to the advisors during the graduation ceremony.