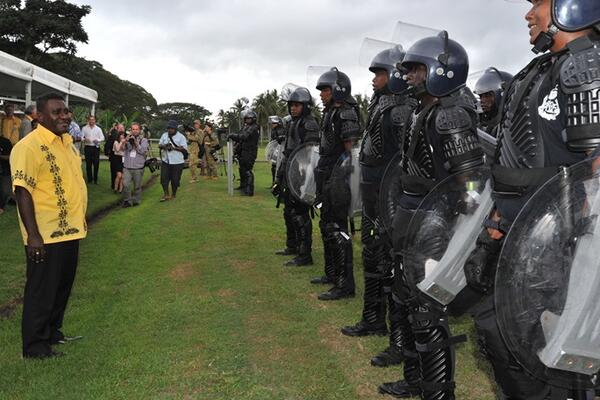 A demonstration of skills and tactics of the Royal Solomon Islands Police Force (RSIPF) and the Police Response Team (PRT) was demonstrated for the Pacific leaders at RAMSI base this week.

The official visit is part of the celebrations marking the 10th Anniversary of RAMSI.

The demonstration showcased the capabilities of the PRT, and their ability to respond to and deal with incidents of public disorder within Solomon Islands.

Members of the PRT have received significant training in advanced public order management skills, up to and including the use of less lethal munitions. They also displayed specialist Public Order Management (POM) equipment and vehicles, worth SBD$2.8 million, which have been gifted to the RSIPF to enhance their capability in responding to such incidents.

“The training and the new equipment will allow the RSIPF’s Police Response Team (PRT) to have a range of options available when dealing with any public disorder. It will make a big difference to the RSIPF’s capacity to handle public disorder should any situation arise in Honiara or in the provinces,” said Nicholas Coppel, RAMSI’s Special Coordinator.

RAMSI PPF Commander, Paul Osborne added: “Select members of the RSIPF Police Response Team have also been trained in the use of canister launchers. The launchers are designed to propel a range of canisters which slowly release smoke or capsicum spray gas, and direct impact munitions which are large hard foam baton rounds.”

Members of the PRT have received extensive training from RAMSI advisors, with this training reflecting ‘best practice’ methodologies from around the globe. The training has been specifically adapted to suit the Solomon Islands context, in order to meet the needs of the RSIPF and greater Solomon Islands. In addition, stringent guidelines have been put in place, in line with the Police Act, which determine deployment of the PRT, and the use of less lethal munitions.