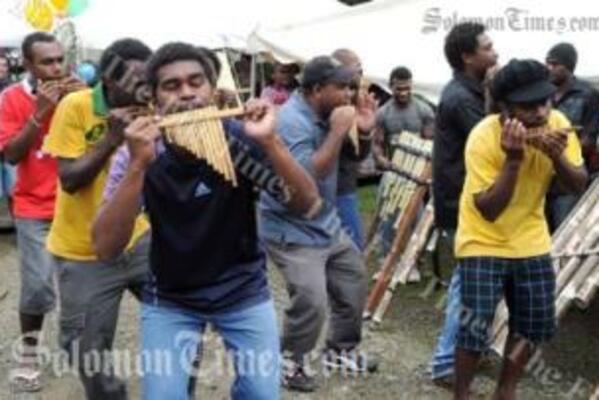 The Solomon Island panpipers were always the crowd favorite since 2009.
Source: Fijitimes.com
Share
Tuesday, 24 July 2012 11:48 AM

Local Solomon Islanders in Suva, Fiji, were instrumental to the Suva Anglican Cathedral by helping to raise $20,700 from its annual bazaar over the weekend.

The Solomon Islands group that entertained was a crowd favourite with their lively bamboo pipe music and dance.

"Most of them are members of our youth group while the rest are students of the university. We invite them every year through our Melanesian community and they have been favourites since they started in 2009," Father Cama said.

Reverend Father Fereimi Cama, the Dean and vicar of the Cathedral, said that while the amount was less than what was raised last year ($26,000), they were still happy with the outcome.

"The target this year was to better last year's fundraiser. We might not have exceeded that amount but it's still a good amount that we've raised and we're thankful to everyone that contributed."

The two-day bazaar which was held at the church ground attracted many who braved the weather to take advantage of the food and craft stalls and enjoy the live entertainment, dances and face paintings.