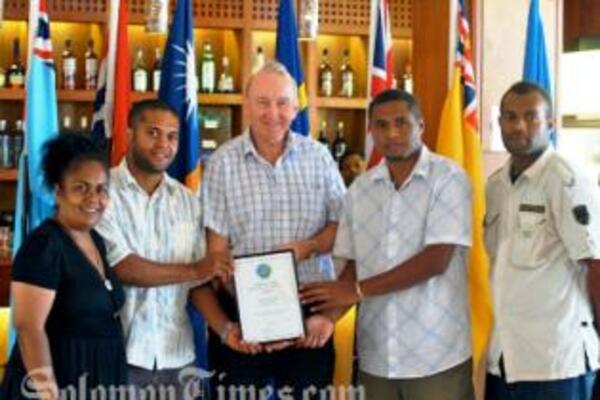 Presenting the award, at a lunch for local journalists, RAMSI Special Coordinator, Graeme Wilson, said the award was in recognition of Footprints' innovative approach and outstanding commitment to current affairs reporting.

"Footprints has taken its viewers out into the streets of Honiara and further afield to the villages of the nation, bringing them thought-provoking programs that explore the very real issues confronting Solomon Islands today, issues as diverse as the proposed new electoral boundaries to the plight of the mentally ill," he said.

RAMSI instituted the annual encouragement award for the media last year as a way of acknowledging the important contribution that a free and robust media can make to rebuilding the nation.

Mr Wilson said choosing this year's recipient had been difficult because there were so many strong contenders.

"It is certainly evident that Solomon Islands possesses a very robust media. I have watched with interest as some of you have not only broken news of one controversial issue or another but have also burrowed away with great persistence on issues of national importance. An example that comes to mind is the Solomon Star's Gina Maka'a's regular Street Talk surveys where she faithfully reports the views of ordinary Solomon Islanders.

"In light of this stiff competition, I would like to congratulate the whole Footprints team but in particular to commend the program's two reporters, Koroi Hawkins and Fred Osifelo, who with their reports are breaking new ground in Solomon Islands journalism," Mr Wilson.

Accepting the award, Mr Koroi said the Footprints team was very proud but also humbled to receive such recognition.

"We did not expect to receive this award and I'd like to recognise all our media colleagues. We all do the same job everyday in different aspects of society and this award, I believe, is from RAMSI to us all," he said."

Mr Wilson urged the media, which he described as the custodian of the national debate, to recognise the responsibility that their profession carried with it.
"This nation essentially only knows what you, the media, tell it. The decisions in the highest office right down to the ballot box can and will be shaped by the quality and timeliness of your work and the faithfulness of your commitment to getting it right and making sure your reports are accurate and balanced."

He said this responsibility was never more obvious than in an election year.

"I encourage all of you to deliver to your fellow countrymen and women the highest quality information available not just about intending candidates but also about the issues that are important to this nation.

The President of MASI, acting head of Government Communications, George Herming, thanked RAMSI for the support the mission had given to the media since its arrival nearly seven years ago, saying that he believed the RAMSI Media Award would 'encourage and motivate local journalists to work harder and better in years to come'.

"Apart from the award, MASI has benefited a lot from the work that RAMSI is doing in this country, from the SOLMAS project but most especially from the safe and secure environment RAMSI has made for journalists to work in," Mr Herming said.